Tis the season for whiskey releases, and like clockwork, Four Roses’ 2017 Limited Edition Small Batch hit the shelves during the annual Kentucky Bourbon Festival. Specifically, Sept. 16 was the day fans flocked to Four Roses’ two Kentucky gift shops—one in Lawrenceburg, the other at Cox’s Creek—to line up for their chance to nab a bottle and a possible signature from master distiller Brent Elliott. Believe it or not, this is the only distillery in Kentucky that does this.

“The magic happened early on with this Small Batch Bourbon—after only my third test blend, I knew we had hit the target and then some,” Elliott said in the press release. “Once we combined them, it resulted in more depth, richness and warmth than any one of the individual recipes.”

This LESB is bottled at barrel strength, and approximately 13,800 hand-numbered bottles will be distributed throughout the U.S. 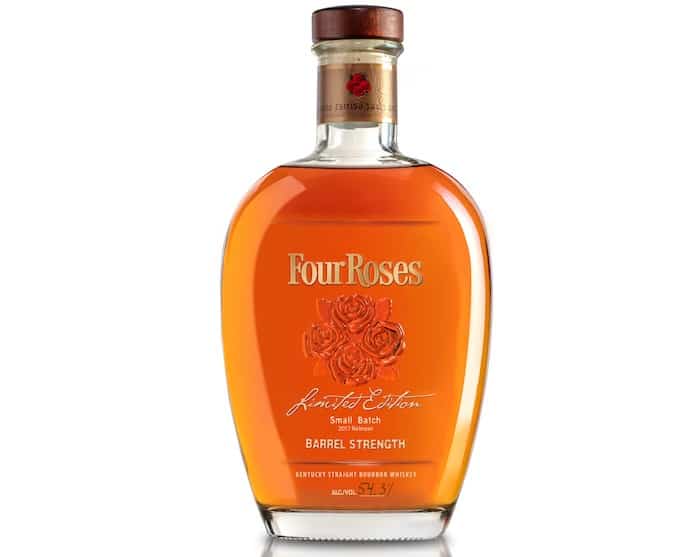 Nose: Like many Four Roses barrel strength releases, this launches with a Juicy Fruit chewing gum bomb followed by more delicate notes of stone fruit, spearmint, oak and a touch of menthol.

Palate: Intensely fruity on entry, the mouth waters instantly as if sucking on hard candy. Mouthfeel is light and silken; it begs to be rolled around the mouth. Finish is bereft of bitterness or tannin. The smidge of burn is far less prominent than the 2016 release. Add a few drops of water and the fun begins: milk chocolate followed by butterscotch, oak, vanilla, roasted pineapple and banana. It’s a liquid fruit salad tossed in a charred oak bowl.

This whiskey is such a pleasure to drink, and inviting to the point of being youthful despite its age. Armed only with a 100ml press sample, I couldn’t spare a drop to test its cocktail performance—not that it needed to prove its mettle among the amendments—or even bother with good ice. No loss, though, as this was delicious au naturale. Those waiting in line won’t be disappointed if they get one.