Editor’s Note: This whiskey was provided to us as a review sample by Fort Hamilton Distillery. This in no way, per our editorial policies, influenced the final outcome of this review. It should also be noted that by clicking the buy link towards the bottom of this review our site receives a small referral payment which helps to support, but not influence, our editorial and other costs.

Before 200 years of American distilling history was wiped out in a mere 20 years, rye whiskey was king. With thousands of small farm distillers speckled across New York and the rest of New England, traditional rye whiskey was America’s most popular libation until Prohibition destroyed small farm operators and corn subsidies influenced mash bills. Then in 2016, bartender Alex Clark founded Fort Hamilton Distillery, a company specializing in the revival of historic New York rye whiskeys.

Single Barrel Rye Whiskey is Fort Hamilton’s flagship offering and the result of Clark’s meticulous commitment to reproduce “old school New York rye whiskey.” Inspired by his love of iconic cocktails such as the Old Fashioned and Manhattan which date back to the 1800’s, Clark explained, “Every decision that went into that bottle was based on how did they do it back in the day, how can we repeat that, and how do we make sure that we get something rich and fat, because that’s what those old ryes were.”

Distilled from 90% New York rye grain and 10% malted barley, with zero corn, flavoring, or coloring, Fort Hamilton Single Barrel Rye Whiskey starts out with a mash bill resembling those used during the American Revolution. It is barreled at a low proof, non-chill filtered, and aged in heavily charred American White Oak. In the tradition of New York ryes, their Industry City, Brooklyn, waterfront rick house is heated in winter to assist the aging process, and each barrel is aged for at least three years before individual bottling, yielding 130 bottles at 90 proof.

By recreating traditional processes, Single Barrel Rye Whiskey presents a more herbaceous, fruit-driven expression of rye. Here the spiciness of rye comes on as a cool, minty zest rather than a hot, peppery burn. The brightness of the spice evolves as it moves across the palate and is balanced by just the right amount of sweetness and char throughout. Similarly, the nose opens with airy aromas of vanilla and brown sugar, deepening into vegetal notes of eucalyptus and lime zest. This refreshing mint expression is equally enjoyable in classic cocktails or as a cool summer sipper. The lingering, tingling mouth feel gives time enough to ponder what Fort Hamilton Distillery’s tasting tour calls the “rise, fall, and rebirth of America’s original whiskey, New York rye.” 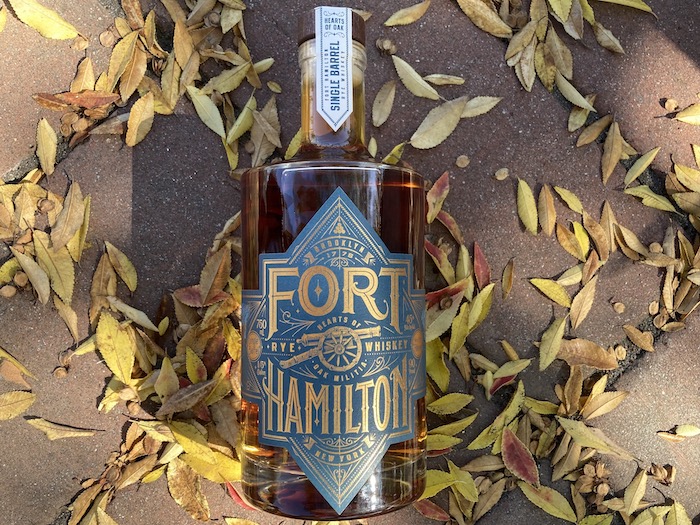 Palate: The rye spice presents as a cool, minty zest balanced by the perfect amount of sweetness and char. The lingering, tingling finish evolves across the palate.

If there were a historical reenactment of whiskey’s American roots, Fort Hamilton Single Barrel Rye Whiskey may very well be it. They have done the work of recreating an original rye style, from American Revolution-era mash bill to traditional barrel aging techniques. It’s worth picking up a bottle even if only to experience what classic cocktails such as the Old Fashioned might have tasted like back in the day of initial concoction in the 1800’s. You don’t have to be a history buff or rye whiskey fan to enjoy the smooth, well-balanced, and herbaceous Single Barrel Rye Whiskey. Likewise, don’t be surprised if Fort Hamilton sparks your interest in both.