The Five Brothers Bourbon is a nod to the beginnings of what is now the Heaven Hill distillery. This offering has a mash bill that consists of 78% corn, 10% rye, and 12% malted barley, a departure from the distillery’s traditional bourbon mash bill.

Five Brothers is loosely coupled with the release of the Square 6 Bourbon, having been unleashed to the world a few weeks earlier. The Square 6 Bourbon also represents a new addition to the distillery’s mash bills, this time a high rye recipe made of 52% corn, 35% rye and 13% malted barley with no age statement. That said, there is speculation that it sits around the five year mark.

Max L. Shapira, the current president of Heaven Hill, said the following in the company’s press release: “In 1935, my father and his four brothers invested in a speculative venture that today is the largest family-owned and operated distillery in America, Heaven Hill Distillery. With patience and perseverance, they built the foundation for the nationally acclaimed American Whiskey portfolio we enjoy today and a legacy built on consistent quality and innovation.”

The brothers themselves are named David, Ed, Gary, George and Mose Shapira. Upon the label of the bottle you will find pictures of each, all of which are when they were in their 20s and 30s. When they bought out the distillery after Prohibition, the brothers had only an idea, passion, and a dream. There was no inventory, no storage, and no brand to speak of. However, you have to start somewhere.

This bourbon is also a blend of Heaven Hill stock. The whiskey is a blend of five- to nine-year-old bourbons of the same recipe, with each year being representative of one of the brothers. Once more this element of the whiskey’s creation is an ode to the distillery’s history and tradition. 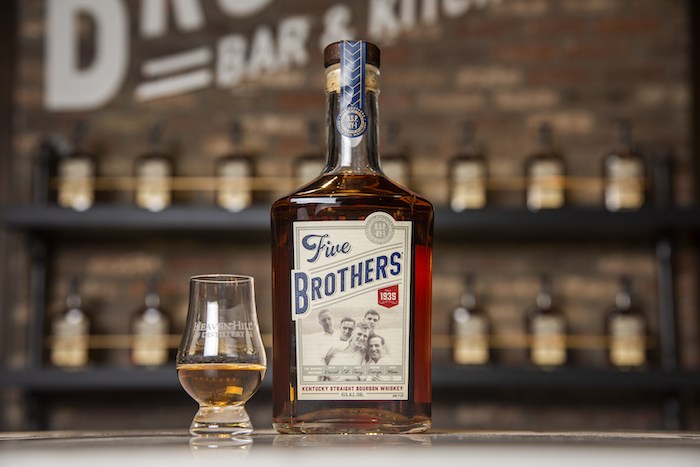 Vital Stats: 90 proof, 45% ABV. This selection is a blend of five- to nine-year-old bourbons from Heaven Hill. Mash bill of 78% corn, 10% rye, and 12% malted barley. Average bottle price is around $60 and is largely available at the Heaven Hill Distillery as well as select retailers in Kentucky.

Appearance: A darker shade of orange, reminiscent of a jam. In the glass, the legs were slow to emerge and were evenly spaced.

Nose: Hot and citrus forward. Think flamed orange zest. Other nuances include a sense of richness and hints of black tea.

Palate: Initially, there were some pretty heavily noted accents. Big oak and notes of spice and a touch of honey. In the mid-palate, found some orange black tea, as per the nose. The whiskey itself had a medium body and the finish was about the same. With the addition of water, the whiskey rounded out nicely and gained more balance.

It was good, though lacked it balance by a bit. It had a touch too much oak and wanted a bit more spice. It drinks like a 12- or 15-year-old whiskey, but the blend maxes out at a nine year. I'll admit to being curious as to the amount of each age being added to the blend. A few drops of water or an ice cube easily helps balance out the tasting experience.

The price point is also a bit of a conundrum. $60 for a bottle is approachable, however, chances are you have to be at the distillery or one of their purveyors. My advice, get yourself a taste and make a decision from there. Cheers!