Editor’s Note: This whiskey was provided to us as a review sample by FEW Spirits. This in no way, per our editorial policies, influenced the final outcome of this review. It should also be noted that by clicking the buy link towards the bottom of this review our site receives a small referral payment which helps to support, but not influence, our editorial and other costs.

When thinking about the Prohibition Era, the 16-year dry period in U.S. history seems eons ago. But in Evanston, Illinois, a suburb just north of Chicago, Prohibition was alive and well until 1972.  Liquor stores weren’t legal there until 1984 and Evanston’s first distillery, FEW Spirits, named for Temperance Movement leader Francis Elizabeth Willard, likewise didn’t exist until 2011. So when this pioneer of craft whiskey commemorated a decade of defiance with a 10th Anniversary Bourbon, it’s no wonder that FEW bottled a little something different.

The 10th Anniversary Bourbon is an extremely limited, one-off bottling that is unlike anything they’ve done before, yet also determinedly resonant of FEW Spirits. It’s made with a different mash bill, utilizing a different cooperage, aged in a smaller, 25-gallon barrel size. FEW Founder and Distiller Paul Hletko shares, “This represents a significant milestone of success for our team. We have overcome so many obstacles to get here, and we owe a huge debt of gratitude to our fans, friends, and family.” Perhaps it’s the snickerdoodle nose or the fat, full-flavored mouth feel or the smooth, round finish that makes the 10th Anniversary Bourbon stand out as a celebratory experience. It is fruit-forward with a festive, sarsaparilla-like spice to it. In a virtual tasting, Paul Hletko describes the 10th Anniversary Bourbon as a “weird little whiskey” that doesn’t fit preconceived notions of what bourbon is or should be. Hletko further shares, “We’re an oddball and this is an oddball whiskey for us.”

Aged six years in American white oak and bottled at 93 proof/46.5% ABV, the 750 ml bottle with the bold gold and sky-blue label sells for $50. However, the roughly 3000 bottles of 10th Anniversary Bourbon are exclusively available in Illinois stores or through a direct-to-consumer channel online. Once the 10th Anniversary Bourbon is gone, it’s gone. Keep your eyes on FEW Spirits, though, the grain-to-glass distillery tucked in an unassuming back alley. For here is an intersection between past and present, and the future is innovative at heart. 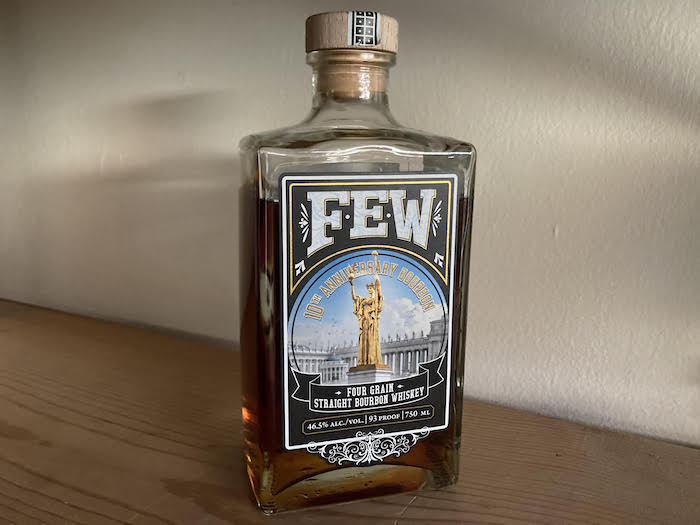 There’s something of a playful, celebratory and daring spirit that comes through in the 10th Anniversary Bourbon. Even tasting it blind, “festive” was a first impression for me. Not in a seasonal, gimmicky way; rather in a let-loose-and-live-a-little kind of way. After the past few years we’ve had, who couldn’t use a little of that? And as always with any craft, I am inspired by a creativity that’s unafraid to experiment and innovate.