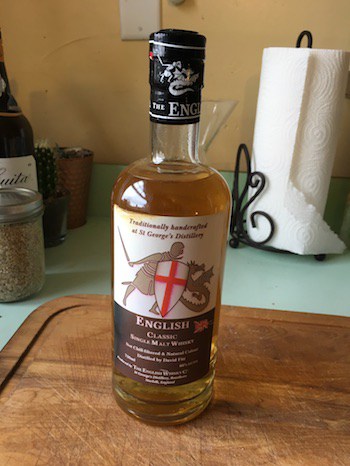 In the recent resurgence of English whisky, one standout is The English Whisky Company, a small producer in Roudham, Norfolk, that put up its first barrels ten years ago this December. The physical distillery itself, confusingly, is called St. George’s Distillery—not to be mixed up with St. George Spirits in the Bay Area—and David Fitt, the company’s current chief distiller, is a former brewer who cut his distilling teeth under Iain Henderson from Laphroaig.

The distillery is a father-son undertaking; James and Andrew Nelstrop opened their doors to the public in 2007 after James, the elder Nelstrop, retired from a career in farming and business that took him from his native Lincolnshire to Australia, then Russia, then back to England. They set up shop in Norfolk, a major barley-producing region also blessed with “superb” water.

It’s a long-forgotten fact, at least in the States, that those two traits—quality local grain and good water—once allowed whisky production to flourish in England. But a hundred-odd years ago, the last English distilleries closed their doors, thanks to pressure from their northern neighbors and the booming popularity of the country’s other favorite spirit, gin. In the last decade, though, growing market interest in local products and new, unique craft spirits expressions has fostered a whisky resurgence on English soil.

The distillery’s flagship lineup uses a chapter system, with Chapter 5 representing their first-ever whisky release (chapters 1-4 were new make or less than three years old, which legally can’t be called whisky in the U.K.).  This particular expression, English Whisky Company Classic Single Malt, lives outside that numbering system. It’s a non-chill filtered single malt, aged in used oak for an unspecified length of time, and bottled at 46% ABV.

Nose: Opens with honey, butterscotch, and light smoke. A touch of maple and a good dose of wood follow.

Palate: Toast and stone fruit—apricot jam comes to mind—pop out on the front of the palate. Smoke comes in before long, as well as a spicy ginger note. Mostly smoke on the finish, with lingering oak. Fairly light mouthfeel.

The English Whisky Company Classic Single Malt is a straightforward, easy-drinking single malt—there’s not a lot of complexity, but it’s well-balanced, approachable, and pleasant, with some nice soft fruit and candy notes to round out the smoke.