We all know whiskey is aged in barrels. According to the Tax & Tobacco Bureau, most whiskey has to touch the inside of a barrel, or it doesn’t count. But have you asked why this whole barrel-aging business began? Well. I hadn’t.

After we, as humans, got smart enough to make booze on purpose, we needed some way to get it around, other than in our bellies. Barrels made a lot of sense because the round shape allowed someone to move a bunch of weight not by lifting it, but by rolling it. To achieve this, the wood needed to be bent, and heating it was the easiest way to gain flexibility. How did early coopers heat it in a simple way? They built a fire inside the barrel.

Oak was chosen because it was common across the northern hemisphere, hard-wearing, and easy to shape. The fact that it imparted a nice flavor and chilled out the new-make spirit was a bonus.

Elijah Craig plays with this happy accident in their new Toasted Barrel Kentucky Straight Bourbon Whiskey. Special-edition barrel finishes are now a dime-a-dozen (not that I’m complaining – bring that sherry-rested anything over here!), but less often is the focus on the toasting or the char level.

Bourbon, of course, must be “put into a new charred oak container.” The ‘average’ bourbon matures in a number four char barrel, the familiar ‘alligator char,’ that cracks and creases the interior, making for lots of contact between whiskey and wood.

Barrels holding regular ol’ Elijah Craig use a number three char, a full 20 seconds less flame than their bourbon neighbors. The finishing barrels for this new release, prior to holding fully matured Small Batch bourbon for additional aging, are first toasted and then flash-charred using a moderate toast temperature and toast time.

Too much thinking, too little drinking. Let’s see how this change bears out! 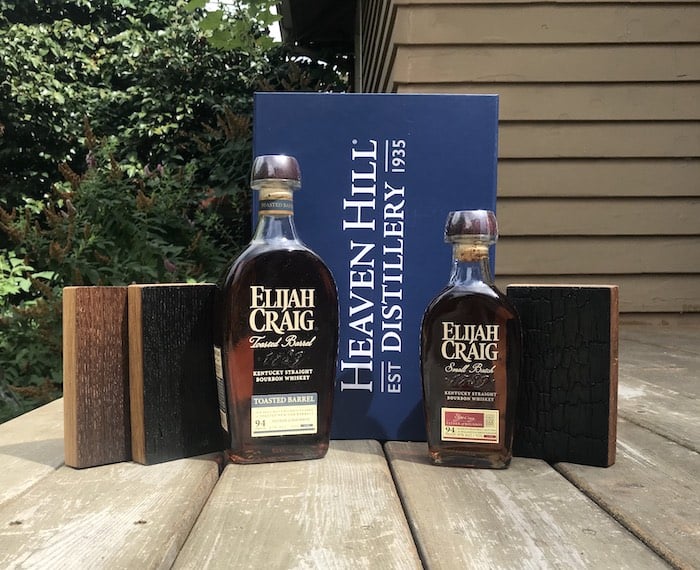 Appearance: The liquid is a light copper in the glass, with a redder cast than the original. My sample came in a handsome paper-board box, with a mini-bottle of original Elijah Craig Kentucky Straight Bourbon Whiskey nestled in, along with chunks of barrel staves displaying custom toast, custom toast plus char number one, and char number three.

Nose: Cherry cola leaps out of the glass, backed by loads of baking spice: clove and nutmeg. Sarsaparilla and cigar box waft up, becoming stronger as the whiskey rests. Toasted Barrel has more depth than the original, which is floral vanilla ice cream and a whisper of banana peel.

Palate: On the palate it’s honeyed and warm in a pleasing way. The spices bloom on the mid palate with a peachy roundness. The finish is minty, shifting to black tea. The regular Elijah Craig is sharper; the heat more pronounced with flavors tending toward vanilla extract.

It was super cool to see the differences in char level and compare the toasted stave. My one wish was that they weren’t finished so I could smell more than varnish on them. I understand they were trying to protect my white gloves from soot. But still.

It's a successful experiment. The Toasted Barrel is tastier and more nuanced. I love getting to taste a vertical in whiskey!