Elijah Craig Barrel Proof, a Heaven Hill limited edition released three times annually that can claim Whiskey Advocate Whiskey of the Year 2017 among its many accolades, is a whiskey I must admit I have a bit of bias towards. I am not as much a fan of the their standard small batch ever since they dropped the 12-year age statement, but the cask strength remains 12-years-old and has some releases in hazmat territory, of which I am also a sucker.

I typically prefer high-rye or wheated bourbons to heavy-corn, which is also known as the “traditional mash bill,” meaning over 70% corn in the mash. Perhaps the juxtaposition of me loving Elijah Craig Barrel Proof while it happens to be heavy-corn is the root of my bias, thus making me appreciate it more. Just feel like I should be up front, thank you for bearing with me.

With my bias out in the open, let’s get focused on this particular release of Elijah Craig Barrel Proof. This review is on the third and final release of ECBP for 2018, “C918.” For an easy rundown of what the coding means, click here. Elijah Craig Barrel Proof C918 could be intimidating with a proof of 131.2 (65.7% abv), but this actually falls on the lower end for this particular bourbon series.

Heaven Hill has done an amazing job of consistently keeping Elijah Craig Barrel Proof on the lower end of the price market for barrel proof bourbon releases, as well. It is rare you can consistently find a barrel strength bourbon in the $60-80 range and that alone is reason enough to like this whiskey. Time to see how this particular batch turned out. 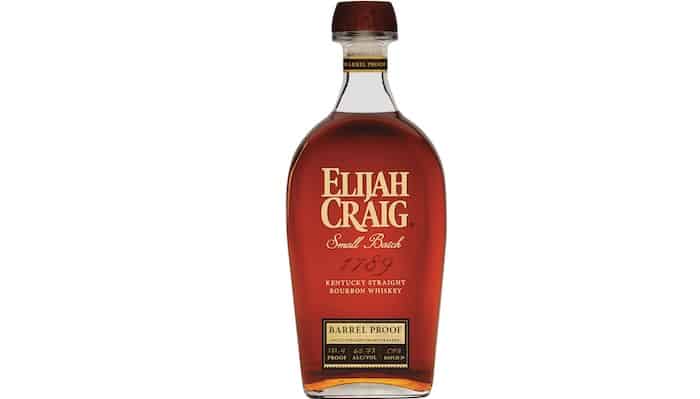 Appearance: Has a reddish hue to it, similar to a Manhattan cocktail.

Nose: Substantial caramel notes upfront that cover the high proof rather well. There is a brightness to this whiskey, but somewhat subdued by a creamy heaviness. Notes of dill and baked maple work together to round it all into each other.

Palate: Oaky, with floral notes and cherries throughout. Mildly creamy mouthfeel that fades fast on the finish, which is long but light. This bourbon becomes spicier with a couple drops of water and unlocks some chocolate.

By my account Heaven Hill has once again given reason to believe in their Elijah Craig Barrel Proof series. This is a high-proof offering that nearly any whiskey drinker could enjoy. Barrel proof whiskies are admittedly not for everyone, but Elijah Craig Barrel Proof could be a great way to introduce somebody curious into the category of cask strength whiskey. A side-by-side of the same whiskey neat and just a couple drops of water is fun with any cask strength whiskey, regardless of your knowledge level.