Editor’s Note: This whiskey was provided to us as a review sample by Egan’s. This in no way, per our editorial policies, influenced the final outcome of this review. It should also be noted that by clicking the buy link towards the bottom of this review our site receives a small referral payment which helps to support, but not influence, our editorial and other costs.

Since 1852 the Egan’s have been in the whiskey business. First merchants, then brewing ales and bottling for other well known whiskey names but making their own behind the Tullamore Brewery in the late 1880s. P. & H. Egan Limited was booming until 1968 when they had to voluntarily liquidate assets. The Egan’s were quiet until 2013 when family from around the globe resurrected the family whiskey business, now a six whiskey line up.

P. & H. Egan Limited was named after Patrick Egan’s two sons that really started the Tullamore side of the business and caused the company’s exponential growth. The first Egan’s whiskies were labeled Egan’s No. 5 and Egan’s No. 8. The history of the Egan empire can still be seen today in Tullamore with the Bridge House Hotel. This was the base of operations for many years and still pays homage to the Egan’s.

Irish whiskey wasn’t always what you think of today. “The word ‘whiskey’ (or whisky) comes from the Irish uisce beatha, meaning water of life.” It used to be unaged alcohol that was infused with herbs, a recipe sold most recently from Irish Mist. This original ‘whiskey making’ technique was brought to Ireland around 1000 AD but the oldest known record of whiskey being made in Ireland is 1405. Records weren’t all that great and mostly oral so it’s hard to know everything about the origins of Irish whiskey.

For this particular release, Egan’s Vintage Grain, what I have here is a single grain Irish whiskey that’s been casked in American oak bourbon barrels and bottled at 92 proof. 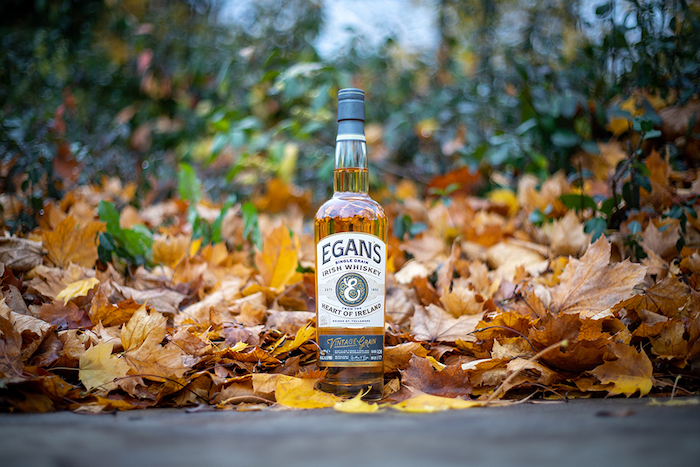 Appearance: A pale golden yellow in color. The label has a very nice celtic design and the bottle tall and easy to hold and pour.

Nose: The aromas are sweet and floral. I am reminded of a honeysuckle but also dried flowers and leaves.

Palate: The flavors start sweet at the front of the mouth but end in a bitter oak finish. There was a spicy burning in the back of my mouth. I found it a bit acidic and dry. The flavors are very subtle and bourbon-like with notes of vanilla, cinnamon, and burnt sugar.

I really enjoyed the the aromas and found the flavors to be pleasant. This whiskey really activated the sweet and bitter taste buds in my mouth. I found this to be unique but not an every day whiskey unless it's in coffee. I feel like Egan's Vintage Grain would make a great irish coffee or perhaps a fruity cocktail. It's not a bad whiskey by any means but it was not a complex whiskey either. The spiciness reminds me of a rye more than an Irish Whiskey.