Editor’s Note: This whiskey was provided to us as a review sample by Egan’s Irish Whiskey. This in no way, per our editorial policies, influenced the final outcome of this review.

Egan’s Irish Whiskey has been around since the 1800s in the hands of various family members. The newest rebirth happened in 2013 with the 6th generation of Egan’s.

Egan’s initially released a 15 year, which was the first in the Legacy Reserve Series. A year later, we have the 16 year Egan’s Legacy Reserve II Irish Whiskey in limited release, with only 1000 bottles available worldwide. It is first aged in American bourbon casks for 16 years and then finished in Banyuls casks.

The name Banyuls comes from the coastal town of ‘Banyuls Sur Mer’ in southern France, on the border with Spain. There are five different types of wines produced in this region. These wines age for a minimum of 10 months and up to three years.

Banyuls wines are similar to a Port but lower in alcohol. These fortified red wines are often referred to as the french cousin to Port. Aging whiskey in these Banyuls casks (or barrels) usually gives the whiskey some floral, citrus and white fruit notes. Egan’s Legacy Reserve II Single Malt Whiskey really picks up on the fruity notes. It’s also very smooth with a little cassis for spice.

These wines are best paired with cherries, dark chocolate, rich meals, or desserts and cheeses. I think the whiskey would pair well with these foods as well. 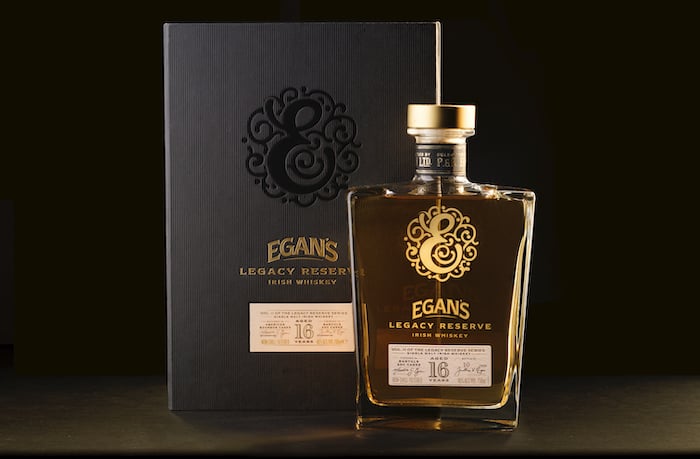 Nose: Smells like apples with a strong fruity burn.

Palate: It’s on the hot side without a touch of water. There’s a big fruity flavor with a bit of pepper heat. It’s smooth to drink even with the strong nose.

This reminds me of a boozy apple pie with lots of spices. It would be a great finish to any meal. If you are into great packaging and rare whiskies then this one's for you. It would look great on any shelf and probably be the envy of all your whiskey loving friends. I think there are some other great whiskies that are far cheaper than this one but I never turn down trying something new.