Editor’s Note: This whiskey was provided to us as a review sample by Du Nord Craft Spirits. This in no way, per our editorial policies, influenced the final outcome of this review.

While I often open these reviews with some sort of commentary on the marketing gimmick a brand is using to sell their whiskey – perhaps too often throwing shade at an approach that seems passe to me – for once, I’m giving credit to Du Nord Craft Spirits for not taking the most obvious path, as I research their Mixed Blood Blended Whiskey.

True, this Minneapolis-based distillery’s name “Du Nord” is arguably an attempt to get a foothold in its home state (Minnesota’s state motto is “L’étoille du Nord” or “The Star of the North”).

However, the story of how founder Chris Montana came to found Du Nord is a very common tale these days – person bounces around through schools and jobs before eventually discovering a passion for distilling and making that passion into a career, et cetera – and I appreciate that Montana chose not his emphasize his own story, impressive as it is.

Growing up in Minneapolis, Montana dropped out of the University of Minnesota in favor of a political career in Washington D.C., and dumped that career to go back to school, eventually leading him to graduate from Hamline University’s law school and become an attorney, according to a profile by The Growler.

Based off of a suggestion to look into the laws surrounding microdistilleries, Montana spent the summer of 2013 making a business plan while “moonshining” in his garage before signing a lease in August – leaving a month of exhaustive studying to pass the bar exam – and spent the next nine months working full time as both a lawyer by day and a distiller by night before eventually choosing the distillery.

To be fair, credit for the marketing strategy probably goes to head of marketing Shanelle Montana, co-founder of Du Nord and the Montana marriage. She seems to have an equally impressive – but less discussed – story of growing up in rural Minnesota and establishing a career in government affairs even after they started the distillery, according to the Minneapolis/St. Paul Business Journal.

Du Nord Mixed Blood Blended Whiskey, the focus of this review, is an in-house, high-rye bourbon that’s blended with a number of sourced whiskeys that accentuate the rye flavor. The age statement is two years and the whiskey is bottled at 40 percent ABV. 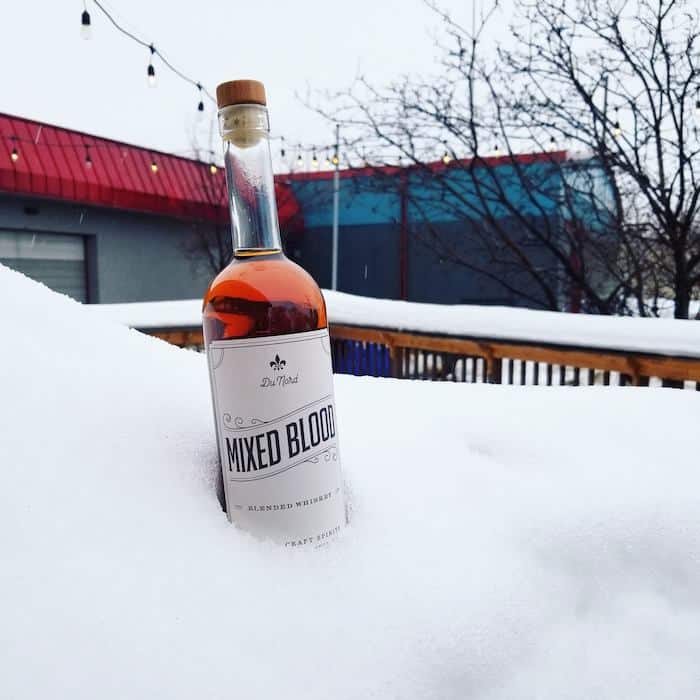 Vital stats: Made from a base of Du Nord-made high-rye bourbon that’s blended with sourced whiskeys. It’s aged for two years and bottled 80 proof. The bottle goes for about $40 at a handful of shops in Minnesota.

Appearance: Packaged in a tall, narrow, nondescript bottle, the whiskey is darker than most – appearing bit brownish like a caramel-flavored simple syrup but also with a tint of red that gives the whole the liquid a coppery hue.

Nose: Entry into the nasal passages brings with it an aroma that might make you believe you’re sipping brandy rather than whiskey. At first, the bouquet is a light, airy, and gentle vanilla that takes on vague floral notes, but that quickly broadens to include more prominent scents of dried fruit (raisin and a bit of prune and date) with lilac and oak in the background. Finally, the aroma settles into a deep, rich molasses.

Palate: At first, a sip of Mixed Blood hits the tongue very sweetly – vibrant like a vanilla but also rich in a way that I normally associate with caramel. After a moment, the rye seems to kick in with an allspice flare that gradually grows stronger over time with notes of oak, raisins and a touch of herbs like oregano and fennel. In the midst of this, the whiskey take an unsual dip into a non-citric, yellow-raisin sour character that reminds me of sherry, before reverting back into normal rye spice. Swallowing sends a burst of allspice throughout the mouth before gradually tapering off into a tingly molasses sweetness.

In some ways I love Mixed Blood and the unique ways that it seems to somehow innovate and riff on top of flavors that are common to so many whiskeys. On the other hand, it also strays a bit too far off the beaten path for me at some points – as with its turns toward the sour and herbal flavors. Yet even though it takes some turns that didn’t sit well with me, those flavors still fit into what felt like a wider, intentional flavor profile. So, while I wouldn’t buy this bottle again, I’m excited to see what’s in store down the line for Du Nord Craft Spirits.