Editor’s Note: This whiskey was provided to us as a review sample by New Holland Brewing. This in no way, per our editorial policies, influenced the final outcome of this review. It should also be noted that by clicking the buy link towards the bottom of this review our site receives a small referral payment which helps to support, but not influence, our editorial and other costs.

Back in October, we wrote about Michigan-based New Holland Brewing moving into the Bottled in Bond Bourbon zone. (Wait, was it only October? It feels like forever ago but this has been the longest year in the world, amirite?!) We’ve reviewed a bunch of New Holland’s products in the past and found them generally decent.

Since one of New Holland’s most popular offerings is Dragon’s Milk, a bourbon barrel aged stout, it seems like a natural evolution to get into a Bottled in Bond whiskey. If you’re curious about the designation, you can thank the 19th century’s Bottled-in-Bond Act for allowing you to read the label and know what’s in your whiskey (no formaldehyde or molasses for me, thanks!)

Dragon’s Milk Bottled in Bond Bourbon meets those qualifications: It’s 100 proof, aged over four years (distilled spring 2016, bottled fall 2020) in new American oak, distilled from a single season, and its mash bill is 70 percent corn, 25 percent barley, and 5 percent rye. Unlike some of New Holland’s other spirits, no beer barrels were used in aging this whiskey. Currently under limited release, New Holland plans to release this for wider distribution in January 2021. 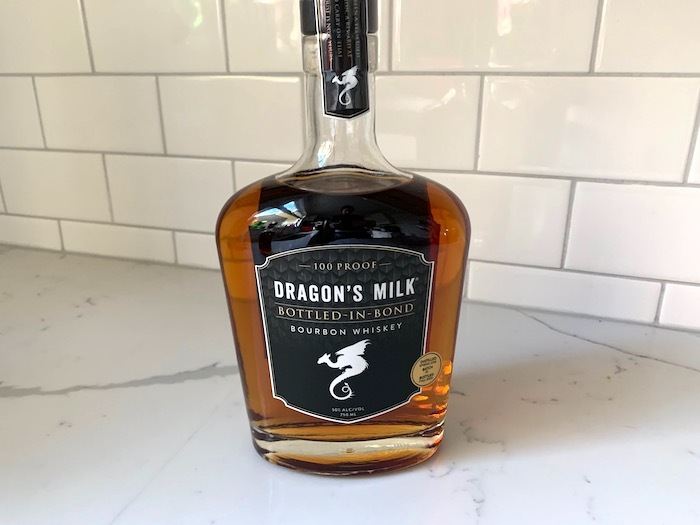 Appearance: Cordovan in the bottle but amaretto in the glass. It goes from a rich red to a shinier brown once there’s less of it.

Nose: Extremely subtle. Quite faint, actually. If we want to continue the loafer metaphor, there’s a light whiff of new shoe leather. Maybe the faintest dusting of peat. It smells like pea flour, actually. And chamomile tea.

Palate: This starts sweet and bland and ends a little sour. There’s a slight cheesy bit to it too. It doesn’t have the extreme feet cheesiness of the IW Harper that I reviewed back in 2016, but still: This kind of reminds me of that. It tastes like the cheese you cut the mold off of and ate anyway but maybe you didn’t do such a thorough job with that excision, you know?

Bottled in Bond should mean quality product, and I am not casting aspersions on the quality of this whiskey, but its flavor didn’t sing to me at all. It tastes watered down, and when that’s the best attribute of the flavor train, maybe you should simply disembark and wait until the next train shows up, you know?