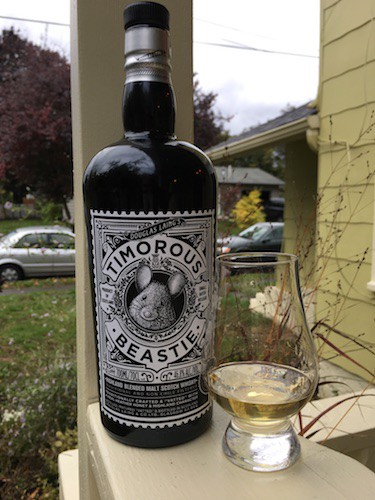 While the cute field mouse adorning a bottle of Douglas Laing’s Timorous Beastie Highland Malt Scotch Whisky may look sweet, drinkers may want to heed the label’s warning: “Not for the fainthearted!”

The warning is mostly overblown, but Timorous Beastie certainly has more bite than the name would imply, starting off pleasantly sweet and turning into a nearly overwhelming burn in the mouth and throat.

Timorous Beastie gets its name from Robert Burns’ “To a Mouse,” a Scottish accent-thick poem reflecting on Burns encounter with a mouse, or “timorous beastie,” after upending its nest in a field. Incidentally, another phrase of the poem also became the title of John Steinbeck’s “Of Mice and Men.”

Douglas Laing’s Timorous Beastie is described as a small batch, non-chill filtered blended malt, combining a number of highland malts from distilleries that include Blair Athol, Dalmore, Glengoyne, Glen Garioch, and others, as we reported on some time ago.

The final result is 46.8 percent alcohol by volume at a price that I’ve seen as high as $60.

Nose: While the alcohol is relatively potent in the nose, that subsides into a tart, citrusy scent, particularly of lime, with floral notes.

Palate: Hits the tongue like warm honey, sweet and syrupy with floral notes and a touch of smoke. A slight burn develops after a bit, but Timorous Beastie mostly stays sweet until it starts to move toward the back of the throat; then the “beastie” aspect seems to take hold as it burns with notes of cinnamon, allspice and pepper. That burn is particularly strong toward the top of the mouth and back of the throat and grows with intensity after swallowing. That takes a minute to subside and leaves the mouth with honey-like coating, with tingles flaring up occasionally for a few minutes.

What starts out tasting like honey turns into a spicy, fiery spirit that is almost too intense for the tongue to discern much. The dramatic swing from sweet to spicy is certainly an interesting experience, but make sure you’re in the mood for a roller coaster when having a dram of Timorous Beastie.

Score: 75/100 [SHOP FOR A BOTTLE OF DOUGLAS LAING TIMOROUS BEASTIE]