Editor’s Note: This whiskey was provided to us as a review sample by Dogfish Head. This in no way, per our editorial policies, influenced the final outcome of this review.

The exploration into distilling by craft brewers is not a far reach. Both processes start from the same humble beginnings: fermentation. It is the further step of distilling that steers whiskey away from becoming beer. Breweries dip their toes into the flavor-rich environment of distilling with varying degrees of success and for multiple reasons. Dogfish Head, Alternate Takes: Volume 2 is a prime example of ambitious intentions that left me wanting on many levels.

There is a reason musical artists’ alternate takes for an album are generally not included in the final cut; alternate takes tend to be either flawed or filled with experimental choices that were deemed distracting or out of character for the song or album as a whole. They are often left in a vault for future tinkering, or for rabid collectors and fans to seek out, cultishly drawn to the legendary offering of unheard tracks. Taking the romance out of the musical reality of alternate tracks, the concept of the name itself is perplexing to me.

For this particular whiskey it is distilled using a grain bill of malted barley, applewood-smoked malt, coffee-kilned malt and crystal malt. It is fermented with the brewery’s Doggie Ale yeast and placed in American oak barrels for a period of unmentioned aging.

The whiskey is then finished in casks that previously aged Dogfish’s Palo Santo Marron brown ale. The wood of these casks is said to be Palo Santo, a Paraguayan wood that “has been used in South American wine-making communities for decades for its uniquely complex caramel and vanilla notes.” 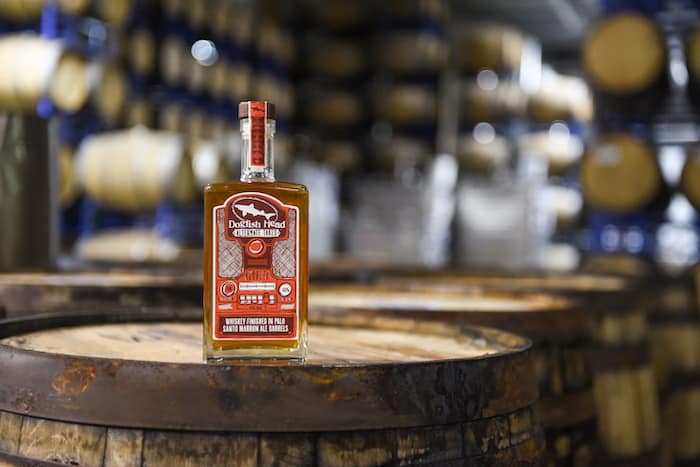 Nose: The initial nose on this spirit has an almost floral tone. There is also the hint of honey that accompanies the soft perfume scent. Adding a large ice cube cooled the wafting aroma to a hint of antiseptic and a glimmer of wheat.

Palate: On the front of the tongue the whiskey greets you with a buttery start that is quickly followed by the sharpness of lingering heat. There is a mineral salinity to the additional flavors that come through. The overall effect is savory and reminiscent of fresh-ground curry spices. There is a hint of clove, coriander, and a nutty note.

Oddly enough, after the oats and savory notes dwindled, the floral accents drifted to a final taste of a cough drop with a hint of fruitiness. The influence of the final beer cask provides touches of a scotch ale flavor as well.

Over a large ice cube, the heat remained the same but some of the more prominent floral notes softened and the oaky and Palo Santo Marron cask characteristics came forward even more.

I laud the creative experimental process that allows brewers and distillers to expand their flavor profiles and exposure for their flagship products. But I approach these efforts with caution, as they are not always the best foot forward for companies and can come off as gimmicky—limited release with a limited reach. Dogfish Head Alternate Takes: Volume 2 is a unique whiskey with an ambitious vision. I just wish the vision was more in focus.