Editor’s Note: This whiskey was provided to us as a review sample by Distillery 291. This in no way, per our editorial policies, influenced the final outcome of this review. It should also be noted that by clicking the buy link towards the bottom of this review our site receives a small referral payment which helps to support, but not influence, our editorial and other costs.

What do you get when you give a retired fashion photographer with a love of whiskey a hand-crafted copper pot still set up in the Colorado foothills? A decent entry into the American whiskey tradition with room to grow.

One technique for short cutting the aging process is to influence the liquor with wood staves or wood chips. The process can speed up the flavoring and coloring process that alcohol goes through during the lengthy process of barrel aging. It is employed by pro and amaetur alike to punch up or smooth out a distillation that is not quite ready for prime time.

I have yet to find a whiskey maker that utilizes wood staves as an integral part to their finishing process that does not produce a less than mature taste profile. I understand why they utilize such techniques; it allows younger brands to cut the que and bring their product to market at a faster rate. This also allows for a quicker return on investment for them. What it does not tend to do is provide the full-flavored maturity that they are trying to short cut.

What it does do, on the other hand, is give a preview of what could come if and when they allow their creation to mature and age for the years it takes to fully develop into the full-flavored creation their imagination intends.

For this release in question, 291 “M” Colorado Whiskey, it starts out as the distillery’s rye whiskey that’s been aged in new American white oak barrels and finished in Aspen staves. It is then transferred to barrels previously used to barrel-age Wisconsin maple syrup by producer Lincoln County Reserve Maple Syrup and then finished for four months. 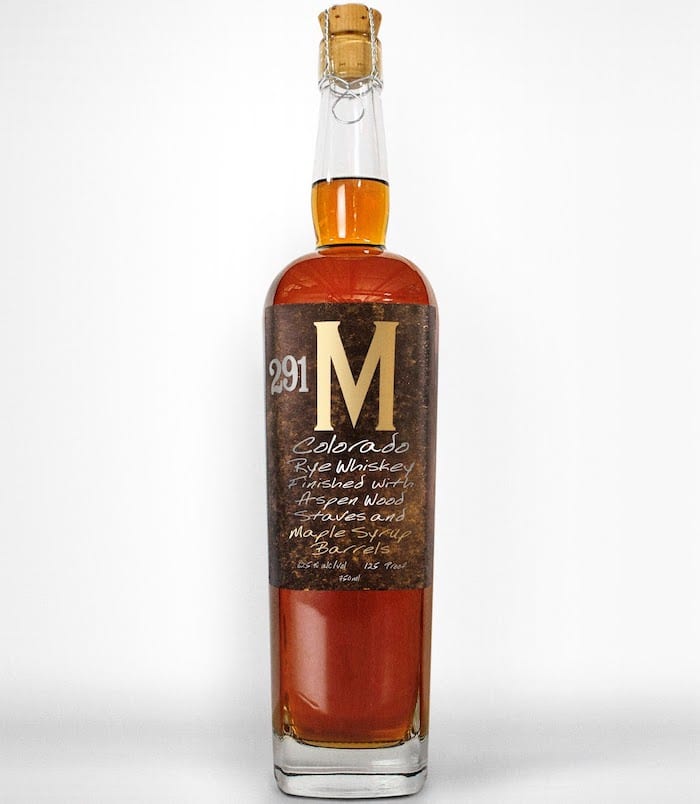 Nose: Maple syrup and pine needles are the most forward of notes. Then I was surprised by the flavor of cola that snuck in. There is a slight metallic note on the end that was accompanied by a hint of cotton candy to finish it off.

Palate: This whiskey was warm but not biting as the heat built to a gentle prickle. Bright citrus notes hit the front of the tongue with the sweetness of brown sugar. After a while the flavor of cinnamon hard candy crept in followed by the taste of old leather with a bit of malt. It finished up with a peppery note on the back with just a hint of sharp peppermint. The sharp flavors smooth out a bit with dilution allowing the cinnamon candy notes to come forward.

This is a fine entry in the American whiskey market from a creative team.