John Dewar Sr. started his company in London in 1846, but it was his son, Tommy Dewar, who garnered attention for the Scotch whisky brand in the late 1880s. Their White Label whisky quickly became and is still a best-seller, based on Dewar’s pervasive advertising. Tommy Dewar even commissioned one of the very first advertisements on film, pre-20th century, projecting dancing men in kilts onto a building in New York City.

In fact, Dewar’s White Label is still the United States’ favorite Scotch – Americans purchase more of this whisky than any other single bottle of Scotch. The brand was more recently purchased by Bacardi in 1998, who interestingly built a museum to showcase much of the brand’s advertising, labels and other knick knacks from the early 20th century.

Dewar’s 12 Year Aged Scotch Whisky is a blend of single malt and single grain whisky and double-aged in oak and sherry barrels. Most of the grain comes from Aberfeldy, a distillery built in 1886 by John Dewar’s other industrious son, Alexander. In addition to their Dewar’s 12 Year Old, the brand also offers their famous Dewar’s White Label, and Dewar’s blends with a 15- or 18-year-old age statement. 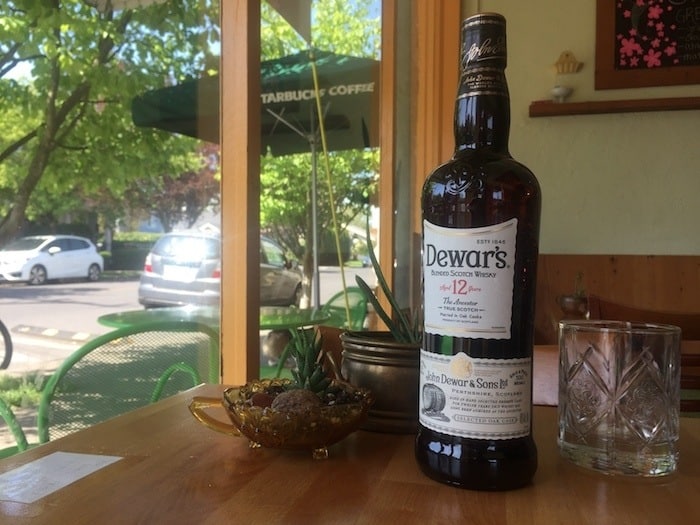 Appearance: This Scotch is a very vibrant caramel color and has quick legs.

Nose: This smells like caramel, black cherries and a chocolate milkshake. There are also light notes of orange peel, and smoke. It smells really good, but it’s not overwhelming.

Palate: Dewar’s 12 Year blend is strikingly smooth. Initially, caramel, charred oak, and smoke stand out. The flavors quickly evolve into milk chocolate, dark cherry, vanilla, and orange creamsicle and savory butter. The finish is short and smokey. When I added one regular ice cube, the flavors diluted too quickly, and left me feeling disappointed. I added more whisky and switched to my special giant round ice cube, which chilled the whisky without diluting. The whole experience is like a warm summer night at the drive-in, complete with buttered popcorn and a milkshake.

I think this is a really good starter Scotch. I haven't had the opportunity to taste a ton of varieties of Scotch, but I definitely really enjoyed sipping this neat out of my Dewar's lowball glass, or with a giant round ice cube - complete with the Dewar's logo that I got in this boxed set. I definitely felt fancy with all this gear. I like sweet whiskies, so the smooth sipping cherry-chocolate milkshake flavor was right up my alley. I would definitely drink this again.

4
User Rating 3.17 (59 votes)
Sending
55
Shares
18.8k
Views
Share on FacebookShare on TwitterGet Our Newsletter
Cheers to the Dads! Personalize a bottle of his favorite whiskey to create a modern gift for the modern man. Use code: FATHERSDAY20 for $20 off your next order of $100 or more at ReserveBar