Editor’s Note: This whiskey was provided to us as a review sample by Del Bac. This in no way, per our editorial policies, influenced the final outcome of this review.

Sitting at my desk in the Pacific Northwest, sipping on a Scottish style single malt out of Arizona that was smoked over mesquite and finished in Extra Añejo Tequila barrels is about as melting pot USA as you can get. Of the American single malts that attempt to go smokey, I would say Del Bac is going about it in a uniquely correct way.

Del Bac is a young distillery based out of Tucson. Originally the owners ran a custom furniture business. Their foray into the distilling world was born from a love of Scotch and a desire to find a way to Americanize the flavors while maintaining the integrity of the Scottish traditions behind distilling.

I was intrigued by the combination of flavors and creativity behind the Del Bac Distiller’s Cut for 2020. Not only were they utilizing their mesquite smoking process (instead of the traditional peat smoking that Scotch undergoes), but they were using different barrels for the final aging than would typically be utilized overseas.

The incorporation and combination of mesquite smoking and aging in tequila barrels truly imbues this spirit with flavors that are regionally distinct to the USA but an interesting nod to our neighbors to the south. Also, I applaud the use of higher quality tequila barrels so that the pairing of sipping tequila with a smoky single malt allows a rich tapestry of flavors to marry and come forth as you drink. 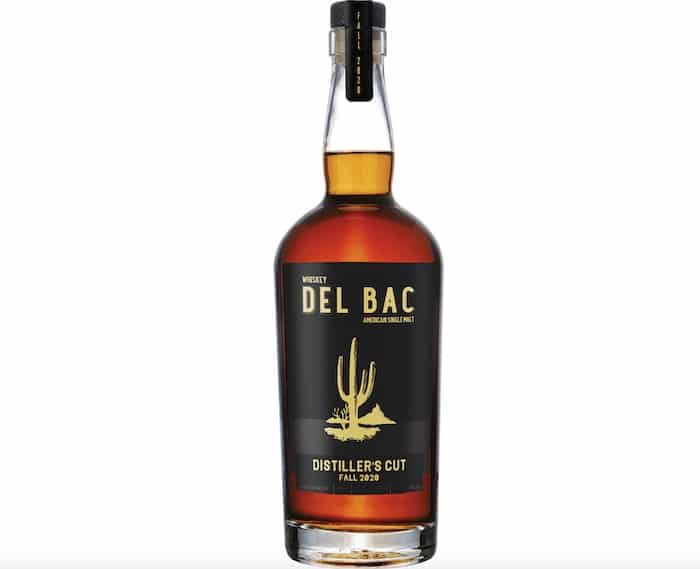 Vital Stats: Bottled at cask strength, the ABV comes in at 57.25%. Only 798 bottles are in the 2020 batch. The whiskey is finished in extra añejo tequila barrels as well as bourbon barrels. Priced at $80, it is already sold out at the distillery.

Appearance: It has an amber hue with a bit of orange to it.

Nose: Brown sugar and smoke are the first notes to hit the nose. The smoke, while similar to a peated scotch, has a slight dryness to it versus the moss and bark notes associated with the Islay fare. While it carries some of the punchiness of Laphroig, it is not as overwhelming as some peated scotches can be. After you wade through the smoky elements there is a fruit base that takes hold that centers on the richer dried fruits such as raisin and prune.

Palate: The first sips hit with a bit of a medicinal note, again reminiscent of a heavily peated Scotch. There is also a strong leather flavor accompanied by the earthy notes of the high desert sands. There is a sharp prickle of heat that warms but never overtakes the flavors. After a few sips the pungent qualities give way to the buttery and fruit notes that really help this whiskey shine on its own without needing to be compared to its predecessors.

A splash of water tamps down the smoke and lets a bit of caramel shine though along with a more present flavor of pear and soft apple.

If smoky is not your flavor, then this is not your whiskey. Many times, I find that cask strength all but screams to be diluted with water or an ice cube, but this whiskey grew on me the more I sipped. I enjoyed it straight as well as with a bit of water but did not find it necessary for the added dilution for my enjoyment. I love that they has taken the time and consideration to not only dive into the deep end of bold flavors, but to do so with thoughtfulness and a true sense of appreciation for the flavors they are presenting to their audience.

It does not come off as an accident that the folks at Del Bac have crafted a truly fine small batch slow sipper. Their intention is front, and center and I cannot wait to see what, given more time for aging, this distillery is able to put forth for the American audience still uninitiated into the smoke infused world of single malts.

4.0
User Rating ( votes)
Sending
7
Shares
1.9k
Views
Share on FacebookShare on TwitterGet Our Newsletter
Cheers to the Dads! Personalize a bottle of his favorite whiskey to create a modern gift for the modern man. Use code: FATHERSDAY20 for $20 off your next order of $100 or more at ReserveBar