Since A.D. Laws Whiskey House’s founding in 2011 and debut in 2014, according to our reporting that year and a tour we took later, the Denver, Colo.-based distillery has been prolific to say the least.

Taking a “craft over commodity” approach, A.D. Laws Whiskey House boasts of doing every step of whiskey production in-house, from open-air fermentation, to double-distilling in their Vendome pot/column still, through aging and bottling. The one step they don’t do is growing the grain, but they source that from within Colorado, according to their website.

Starting out with their signature Four Grain Straight Bourbon Whiskey – made with a mash bill of 60% corn, 20% wheat, 10% rye, and 10% barley, all from Colorado, the distillery has gone on to produce some interesting takes on those grains. Those expressions include their Secale Straight Rye, Triticum Straight Wheat as well as sub-expressions of those like single-barrel cask strength versions and Bottled in Bond versions, the latter being made with grains from a single season’s harvest.

Over the last year or so, they have started a Special Finish Series, in which they finish their Four Grain Straight Bourbon in casks that have held other kinds of alcohol, such as 2017’s Armagnac and Sauternes finishes.

This year, A.D. Laws is releasing at least a couple more – a Ruby Porto cask finish and a Rum cask finish – and those will be the focus on this four-part review, which also includes their Triticum Straight Wheat and Secale Straight Rye Cask Strength.

While A.D. Laws has one of the most detailed and informative websites I’ve ever seen from a distiller, they make scarcely a mention of this series on their website, much less specific details about the new additions to the Special Finish series, and most online retailers don’t have these for sale just yet. 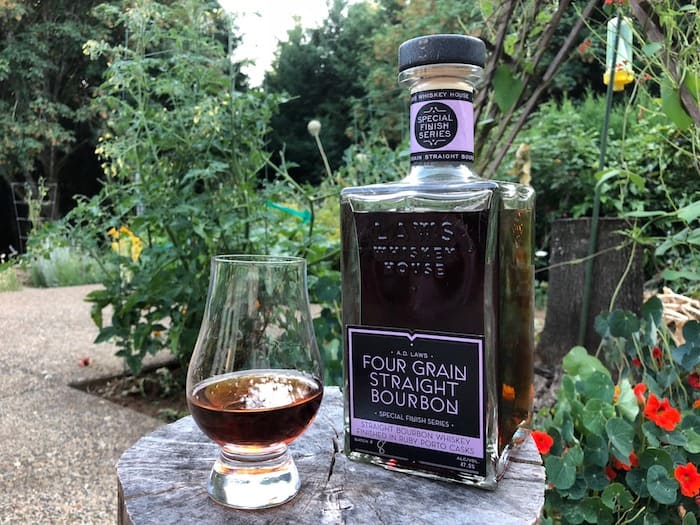 Vital stats: Based on the regular Four Grain information, the rum cask finish is made with Colorado grains and a mash bill of 60% corn, 20% wheat, 10% rye, and 10% barley, fermented in open air, twice distilled, aged at least three years, and bottled at about 47.5% ABV. It’s obviously finished in rum casks, but it’s unclear how long.

Appearance: Packaged in an elegant, rectangular bottle that evokes an old-timey western feel, the rum cask-finished Four Grain Straight Bourbon – both the bottle and the glass – is on the browner and darker side of whiskey, with a coppery tint adding a bit of red to the color.

Nose: At first inhale, this bourbon hits the nasal passages with a well-balanced, tropical bouquet. Tart pineapple is the strongest scent at the outset, mellowed with an undertone of vanilla and notes of ginger and oak. That eases into an earthier blend of caramel and red apple, this time with more pronounced oak and a touch of allspice.

Palate: The red apple theme sticks around in the first sip and provides a refreshingly restrained sweetness as this bourbon hits the tongue, with just a touch of caramel and wheat flavor giving it a mellow flavor at the outset. That develops into an interesting spice combination of cloves and rye at the forefront with notes sweet corn, allspice, and a touch of coriander, with a burn that builds up to a moderate intensity as it sits in the mouth. Then the burn seems to almost completely cease after swallowing, leaving a vague allspice sweetness on the tongue until the clove and rye builds up slowly throughout the corners of the mouth, almost imperceptibly so until the burn is moderate again. That slowly fades into an oaky, barley-like sweetness that lingers in the mouth.

The Takeaway: While not one I could drink every day, the rum cask-finished Four Grain Straight Bourbon is a unique experience that certainly merits trying. It seems to touch on all of grains that make up its mash bill while taking on some tropical flavors reminiscent of the rum casks it was finished in. The spice combination that results is unconventional and refreshing, though perhaps best saved for when you’re feeling in the mood to be surprised.

Vital stats: Again, using the regular Four Grain as a guide, the Ruby Porto finish is made with Colorado grains and a mash bill of 60% corn, 20% wheat, 10% rye, and 10% barley, fermented in open air, twice distilled, aged at least three years, finished in port casks, and bottled at about 47.5% ABV.

Appearance: Much like its rum cask-finished sibling, this bourbon is also a dark brown, this time without the coppery tint, leaving it appearing like an amber ale.

Nose: The nose on this bourbon starts off on the moderately sweeter side, like red apple with caramel and a touch of nutmeg. That yields to earthier aromas of molasses, oak smoke, fortified wine, and salt, with the smoke and wine attributes building in strength over the next few seconds,

Palate: The port-cask finish certainly makes an impact on the Four-Grain Straight Bourbon, as is evident from a salty, slightly sour taste that makes its way onto the tongue in the first sip. That influence comes off as a salted caramel flavor when this whiskey first hits the tongue with notes hay, yeast, wheat and cloves coming together to give it a spicy sour flavor overall. The wheat and cloves build up more and more as this whiskey sits on the tongue into a spicy-sweet combination. Swallowing sends a burst of sweet, slightly spicy wheat through the mouth followed by the clove building back up into a mild burn, before fading back to a slightly salty caramel sweetness that lingers on the tongue.

The Takeaway: I must confess that I’ve never been a fan of port, and I was not fond of the salty and sour attributes that the port-cask finish imbued onto this whiskey. Nonetheless, I was impressed by how much influence that port finish had on the final product and the attributes that showed through. While this won’t be one I seek out, those who enjoy whiskey, port, and whiskey influenced by port would do well to pick up a bottle of this bourbon.

Vital stats: Triticum Straight Wheat is made with a mash bill of Soft White Centennial Wheat (a varietal of Spring wheat) grown in Colorado’s San Luis Valley. It is twice distilled, aged for three years in new American white oak barrels, and bottled at 100 proof. A $750mL bottle goes for about $70 apiece.

Appearance: While this Triticum appears to be relatively dark brown in the bottle, once poured its hue is much closer to an average golden amber than the others.

Nose: This one is sweet and wheaty from the get-go, like a bright vanilla with a good dose of ginger and lemon giving it a bit of a sour edge and just touches of sandalwood and lavender. That mellows into an earthier vanilla with elements of hay, lilac, allspice, orange, banana, and oak.

Palate: Triticum is sweet on entry, tasting like the caramelized sugar on a creme brulee with subtle notes of orange, rose, and oak. A spicy element gradually eases its way across the tongue with a clove-like character with a touch of hay keeping it relatively mild at first. Holding the sip on the tongue allows the clove to build into a moderate burn, until swallowing sends rush  of a spicy grain throughout the mouth – tasting like wheat but the burn of a rye. That eases back down into an earthy honey that tingles with clove and oak for the next minute or so.

The Takeaway: Again, not one that I would want to drink every night, but Triticum Straight Wheat is certainly an experience worth having. While wheat-based whiskeys tend to be very sweet, this one manages to keep that element while developing a rye-like spiciness, all the while letting neither side get so overpowering that they eclipse any other flavors. That great balance makes this one I’d reserve specifically for sipping, one that I’d keep for a cool autumn night with a fire and the mild burn of this Triticum to keep me warm.

Vital stats: This Secale (Latin for “rye”) Straight Rye is made from a mash bill of 95% heirloom rye – half of which is malted and the other half raw – and 5% heirloom barley grown in the San Luis Valley in Colorado. A sour mash is fermented in open air and aged for at least two years in new, charred oak barrels before being bottled at barrel-proof. Aging time and proof varies from barrel to barrel, and the one I reviewed came from barrel 172, was aged for 4.3 years, and bottled at 71.6% ABV. Pricing on this one seems to vary considerably between barrels, and retailers don’t seem to always distinguish this one from the regular Secale. That said, prices I saw ranged from $90 to $110.

Appearance: Again, the bottle design makes this one look darker than it does in the glass, but once poured to looks like a standard golden amber with just a touch of red.

Nose: Another sweet and acidic one to start off the nose, in this case with a bright vanilla as the base alongside an orange scent giving it a bit of tartness, and a bit of oak rounding it out. While the orange sticks around, the vanilla mellows into a richer, earthier caramel with touches of coffee, nutmeg, and a vaguely floral scent.

Palate: The first sip hits the tongue with the sweetness of a drop of clover honey with soft notes of grass, nutmeg and lilac, but it takes barely a moment for the cask-strength proof to assert itself. Shifting to more of a butterscotch base, this rye quickly builds in intensity with tingling the tongue with the spiciness of cloves, cinnamon and notes of charred oak. That sears the edges of the mouth the longer it stays on the palate, until swallowing give a momentary relief of caramelly sweetness. Those spicy flavors build up once again, though, to a searing point, before fading back to leave an smoky, oaky, honey flavor in the mouth. Adding a touch of water to the glass generally keeps the same experience but curtails the spicier attributes while make the honey sweetness more pronounced throughout.

The Takeaway: While I’m often daunted by cask-strength whiskeys, especially ones that are nearly 72%ABV, I really appreciate that this one was left cask strength. While the spiciness of the rye combined with the high proof makes it hard for me to enjoy this neat on a regular basis, it still shows complexity despite those factors. Although my touch of water was imprecise, that addition pushed this to be among the sweeter rye whiskeys I’ve sampled. Leaving it at cask strength allows the drinker to choose what kind of experience they’d like, which strikes me in this case as a conscious choice rather than just a whim on the part of a master distiller.

63
Shares
2k
Views
Share on FacebookShare on TwitterGet Our Newsletter
Read More Whiskey News
Whisky Reviews: Puni The Italian Malt Whisky
Cheers to the Dads! Personalize a bottle of his favorite whiskey to create a modern gift for the modern man. Use code: FATHERSDAY20 for $20 off your next order of $100 or more at ReserveBar