Editor’s Note: This whiskey was provided to us as a review sample by Virginia Distilling Company. This in no way, per our editorial policies, influenced the final outcome of this review. It should also be noted that by clicking the buy link towards the bottom of this review our site receives a small referral payment which helps to support, but not influence, our editorial and other costs.

Even your non-whisky-drinking friends know about Scotch. They might not know the first thing about the barley, or peat bogs, or distilling, or the five Scotch regions. But they’ve been inundated with images of Scotch drinkers most of their lives, on big and small screens, in literature and from celebrities. The cultural cachet of Scotch goes far beyond Mark Twain, Humphrey Bogart and Ron Burgundy.

American single malts, on the other hand, probably elicit a shrug from most people. “What is it?” they’re likely to ask.

That lack of a defined market niche cuts both ways: Certainly doesn’t boost sales, but it frees distillers up to experiment with whiskies made from malted barley in ways their Scottish counterparts couldn’t or wouldn’t imagine. One of those emerging brands is Virginia Distillery Company, based in Lovingston, just south of Charlottesville.

Back in March, just before the pandemic curtain dropped around all of us, I reviewed the tablesetting Prelude Courage & Conviction release from VDC. It wasn’t bad, and showed creativity and promise for the young distillery. Now we have the distillery’s first full release: Courage & Conviction American Single Malt (dropping the prelude).

Courage & Conviction is better than the Prelude, more well-rounded and subtle. This is good whisky. It clearly shares roots with its predecessor, in any case, and shows the same creativity and promise. 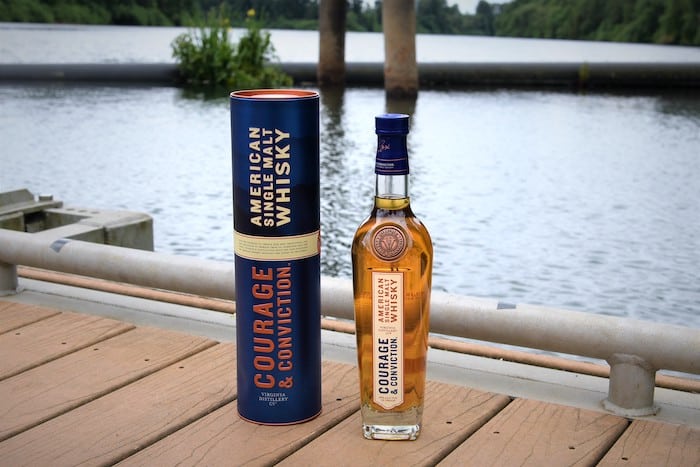 Nose: Rich and sweet, almost as if it had been aged in port barrels. Redolent of coconut, lavender, raisins, dried apricots and fabric softener.

Palate: Knocks softly rather than kicking the door down. Light up front, coming into its own as a slightly sweetish-ish but  balanced whisky in the mid-palate and finishing graceful and long. Fruity, floral and a little bit winey. Brings to mind bubble gum, prunes, toffee and fruit cake.

VDC seems to be going about its business the right way, and is creating fun, distinctive American single malts that share roots with the Scotches we all know and love while being distinctly new and different at the same time.