Editor’s Note: This whiskey was provided to us as a review sample by Copperworks. This in no way, per our editorial policies, influenced the final outcome of this review.

We’re here to discuss Copperworks and their American Single Malt Whiskey. Owned and primarily headed by duo Jason Parker and Micah Nutt, Copperworks produces gin, vodka, and single malt whiskeys out of Seattle’s downtown waterfront in Washington. The combination of Parker and Nutt could not have brewed a more perfect storm for the vision of Pacific Northwest craft distillation.

Parker, who holds degrees in microbiology and chemistry, claims the titles of first head brewer of Pike Brewing, brewer at both Fish Brewing and Redhook, and Brewmaster at Pyramid Breweries. Nutt, on the flip side of the coin, originally trained as a software engineer, but held a strong passion for home brewing in conjunction with a 20+ year friendship with Parker. Their forces combined, the duo barreled their first whiskey in 2014 using a wash of 100% pale malted barely produced at Elysian Brewing.

When it comes to whiskey, Copperworks is all about the small batches. This particular release is number 13. And they are all about full disclosure, with every single batch with product specifications listed per release on their website. The specs are incredibly detailed, including which barley combinations, cooperage, aging temperatures, and more. 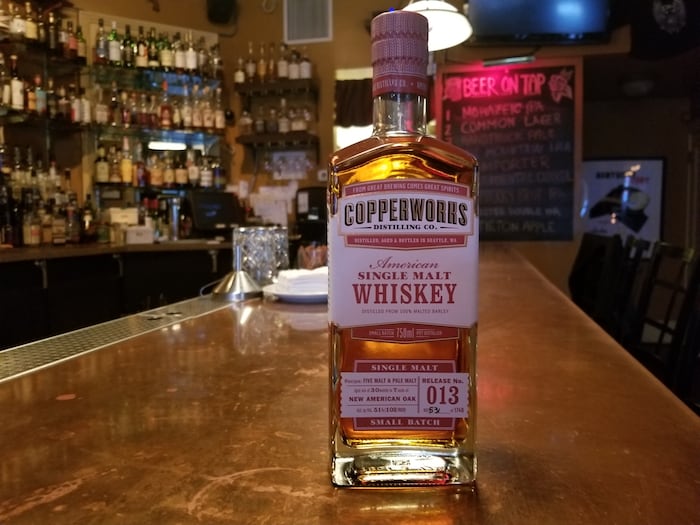 Nose: Citrus up front, with a bit of toasted toffee in the background

Palate: Light bodied, smoked honey, orange, with a bit of heat. Finishes with a touch of vanilla. The addition of an ice cube helps balance out the heat and citrus/sweet flavors.

I enjoyed this one and am curious as to what the other batches taste like. It's really cool that Copperworks keeps such detailed information on each batch of whiskey and makes it available to the consumer. As far as whiskey producers in the Pacific Northwest go, this one is certainly a front-runner and worth keeping an eye on.