Colonel E.H. Taylor Jr. Four Grain Bourbon is a small batch, limited release whiskey in the Colonel E.H. Taylor Jr. line. A four grain bourbon is an unusual style, but Buffalo Trace claims the mash bill of corn, malted barley, rye, and wheat is part of “honoring tradition.” Apparently, these were the four grains available to Colonel Edmond Haynes Taylor Jr. when he was originally bottling bourbon in the 1800’s. The brand also uses labeling similar to the original bottling, and even ships in wooden crates.

“The impetus behind this multi grain recipe was based on the success of Buffalo Trace’s existing rye and wheat bourbons, harkening back to Taylor’s thinking of using the best of the best, “ says a prepared statement from Buffalo Trace Distillery about this release. “We wanted to extract everything we like from both the rye and the wheat mashbills we currently use and combine them to see how they react,” said Master Distiller Harlen Wheatley. “Not surprisingly, it added complexity to the finished product.”

Also unusual, the four grain is a BiB whiskey, meaning it’s Bottled-in-Bond. To be a certified BiB, the requirements are stringent. The whiskey is made in one distillation season at a single distillery, then kept in a federally bonded warehouse under U.S. government supervision for at least four years (this one aged for 12), and lastly bottled at a perfect 100 proof. The BiB label must identify the distillery and bottling location as well. Quite a process! 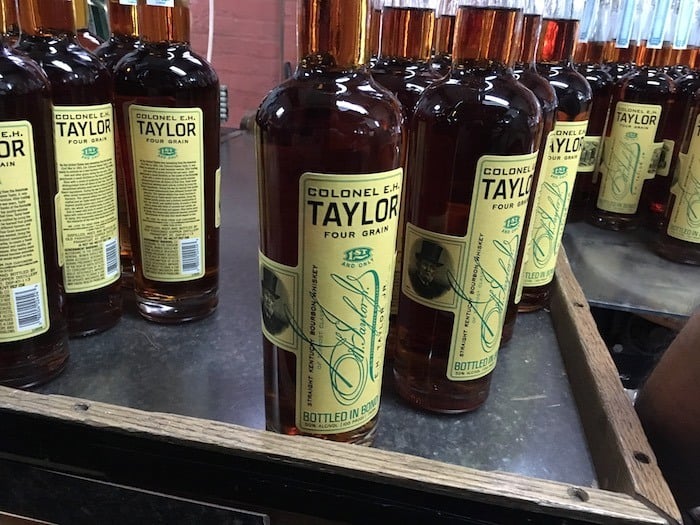 Appearance: This bourbon has a deep amber or ash wood color, with a touch of the aged oranges you sometimes see in cognac. It’s sun kissed, bronzed, and I can see yellow tinges around the edges of the glass. Legs are well spaced, slow and lingering.

Reasonably priced compared to similar limited releases, this bourbon is worth sipping! Mature flavors and opulence make it ideal for sipping and savoring. However, if you’re looking for a style with restraint, you won’t find it here.

4
User Rating 3.16 (69 votes)
Sending
360
Shares
882
Views
Share on FacebookShare on TwitterGet Our Newsletter
Cheers to the Dads! Personalize a bottle of his favorite whiskey to create a modern gift for the modern man. Use code: FATHERSDAY20 for $20 off your next order of $100 or more at ReserveBar