Editor’s Note: This whiskey was provided to us as a review sample by Clyde May. This in no way, per our editorial policies, influenced the final outcome of this review. It should also be noted that by clicking the buy link towards the bottom of this review our site receives a small referral payment which helps to support, but not influence, our editorial and other costs.

The distributors of Clyde May whiskey spin a good yarn. The brand bears the name of Alabama’s most notorious bootlegger of the 20th century. Undeterred by an 18-month prison sentence in 1973, Clyde May was renowned for the quality as much as the quantity (300 gallons a week if you’re interested) of moonshine he produced from a still tucked in the woods of Bullock County.


When May died in 1990, his son Kenny undertook to honor his father’s legacy by producing spirit legally. The Clyde May brand has gone through some legal turbulence and changed hands since but is presently distributed by Conecuh Ridge Distillery Inc. who announced plans to build production facilities in Troy, Alabama, in 2017. Those plans now appear to be underway.

The life and times of infamous moonshiner Clyde May make for a fun read, but once you’re past the surface it’s not entirely clear what that story has to do with the contents of today’s bottle of Clyde May’s Special Reserve Straight Bourbon. Clyde May’s branding leans into establishing a lineage of Alabama moonshining which the product itself doesn’t closely share, or at least doesn’t seem to based on the scarcity of concrete details that are made available. Most everything I read was big on story but light on substance.

I won’t pretend that this complaint is anything new. In my search for information about this bottle I turned up a number of reviewers of past Clyde May products featuring the same gripe. While I read a good bit about how Clyde May made and aged his unlicensed booze back in the ‘60s, I had a difficult time finding the same level of detail about the bottle being sold today, save for a small note on the label noting that it was distilled in Indiana. But to be clear, you’re far more likely to catch me buying stock in MGP than bashing sourced whiskey and Clyde May’s Special Reserve Straight Bourbon will give bourbon drinkers almost exactly what they want. 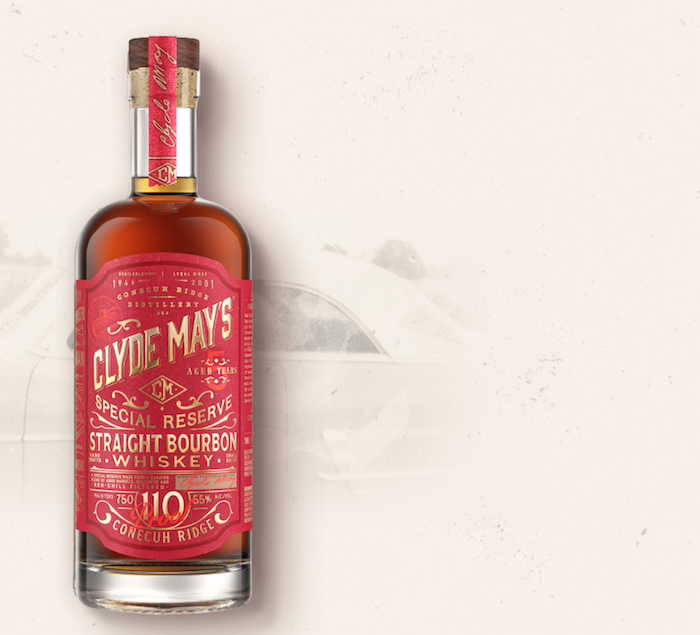 Appearance: The color is a darker brown amber.

Nose: I detect aromas of brown sugar and spice, cloves in particular.

Palate: This is a high proof bottle of whiskey and it drinks like it. If burn is not your thing, definitely consider serving on the rocks or with a couple drops of water. Served neat it is sweet on the palate. This bourbon plays all the hits: Notes of brown sugar and brighter fruit flavors are easily discernible, giving way to tannins and baking spices for a relatively long finish.

I don’t have any major issues with the actual juice–this is a solid if not particularly unique bourbon on its own and seems like it might play well with others in a cocktail–but the marketing left an off-taste lingering in my mouth. At the end of the day, one’s taste in storytelling is as subjective and personal as one’s taste in beverages. For some, the outlaw story might be appealing and really add something to the drinking experience. But for my part, I’d be a lot happier if Spotify radio just happened to dial up Steve Earle’s Copperhead Road while I was drinking this same bottle but priced about $15-20 cheaper, with no story attached whatsoever. The gap between narrative and fact fails to justify what feels like a markup on an otherwise solid bottle.