Editor’s Note: This whiskey was provided to us as a review sample by Clonakilty. This in no way, per our editorial policies, influenced the final outcome of this review.

High atop the cliffs overlooking the Atlantic Ocean of southwestern Ireland stands the Clonakilty distillery. Across the ocean and another continent away, the Pelican Brewery adorns the west coast of Oregon. These two family-owned providers of spirits and beer make an unlikely couple to meet for a drink, let alone bring forth a collaborative progeny. But creative partnerships seem to be the name of the game at Clonakilty as this young distillery forges their way into the world’s whiskey marketplace.

Founded in 2018, Clonakilty Distillery is a family-owned farm that, after generations of tilling the land, shifted their gaze towards distilling. They still farm the land of their forefathers and that is where the grains for their distillations come from. They have an eye on sustainability and quality and with more years under their belt, I have high hopes for this upstart distillery.

Barrel aging in everything from sherry and port casks to beer and bourbon barrels has a long tradition with distillers. The aging process is where the color, depth in flavor, and final tweaks in flavor are realized. I find that beer tends to receive greater benefits from aging in whiskey barrels than vice versa, but in this case, the paring works rather well.

Taking the maltiness and bitterness of beer to imbue depth is a risky choice as it can be overwhelming. The 3-month finishing in the barley wine barrels that were provided by Pelican after hosting its Mother of All Storms brew was a good call, with enough time to influence the flavors without dominating the flavor profile. 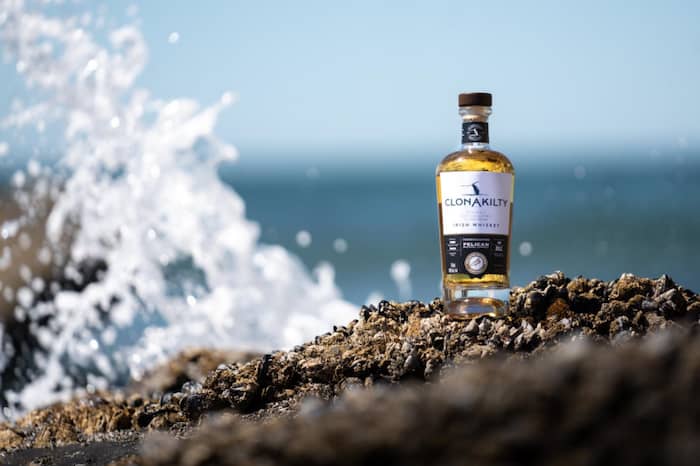 Vital Stats: This Irish whiskey is finished for 3 months in Pelican Brewery Mother of All Storms Barley Wine barrels. It has an ABV of 46%. Only 1500 bottles have been released for the two companies in the States for about $60.00.

Appearance: The whiskey has the appearance of a sun kissed blonde.

Nose: The first wafts present a bold malt note with a bit of wheat as a follow up. There is also notes of banana, leather and a hint of dried fruits.

Palate: This whiskey presents with a buttery mouthfeel on the front of the tongue. There is a pleasant warmth that lingers just long enough to warm the mouth and throat. As it passes over the sides of the tongue, there is the bright and bitter whisper of fresh hops. There is a bit of a medicinal quality on the middle of the tongue and a peppery finish. Oak is present throughout and it has a bit of the bite of a pale ale without the beer notes overtaking it. The after taste has a hint of grapefruit and pine needles.

My first impressions were not of a daily sipper. But it does grow on you with its subtle bitterness and salinity. Its medicinal qualities are a bit out of balance with the fruity notes but not so much that it detracts from its pleasant overall flavor. It is a nice whiskey and the collaboration with Pelican Brewing did not hinder the whiskey as some brewery collaborations have for others.

Even though this is a bit pricey for my tastes in its current iteration, I would definitely sit down with a shot and a beer with this being a solid choice for a boilermaker.