Clear Creek distillery was started in 1985 by Steve McCarthy because of a few lucky happenstances. The McCarthy family has had apple and pear orchards in Oregon since 1910, with Steve McCarthy’s uncle running the business in the 1970’s. Around this time, Steve owned a hunting accessory company which often took him on business trips to Europe, where he witnessed how pears are turned into eau-de-vie.

When, in the 1980’s, the family business was in peril due to increasing competition, Steve decided to turn their crops into eau-de-vie when no other Pacific Northwest distillery was doing this. The rest, of course, is history, with Clear Creek creating a very successful line of eau-de-vie, liqueurs, and brandies using Oregon-grown fruits.

The McCarthy’s Single Malt started in the mid 1990’s. Steve was on a fishing trip in Ireland and the fishing was going terribly, so he decided to try all of the whiskies in the lodge’s bar. He discovered he really enjoyed peated scotch. He was friends with Kurt and Rob Widmer (of Widmer brewing) and asked them to special order peated malted barley and make the wash.

Not too much has changed since those first batches. Double Mountain in Hood River started brewing the wash about two years ago, but everything on the market currently is brewed by Widmer. The malted barley is being sourced from a malting house in Inverness (my guess is Bairds Malt but Clear Creek did not specify) with the barley being peated to over 40+ ppm. They are using rather small (60 gallon) Arnold Holstein Copper pot stills and a one pass distillation. The master distiller was Steve McCarthy but is now Daniel Ruiz. 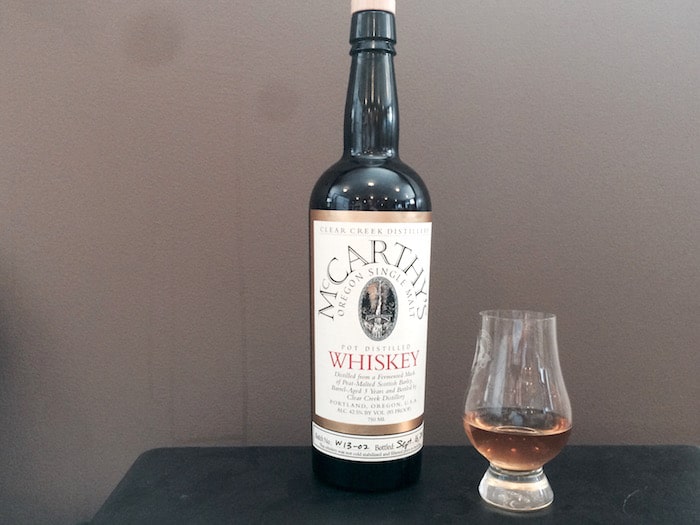 McCarthy’s Oregon Single Malt Whiskey was one of the first American single malts. It’s made with peated malt imported from Scotland. (image copyright The Whiskey Wash)

Nose: Incredibly light. I was expecting intense peat smoke right away, but instead got wisps. Hints of charred BBQ, like the blackened ends of brisket mixed with some burning rubber. This whiskey is youthful on the nose.

Palate: The smoke comes in sharp and intense at first, with more mesquiteBBQ flavors overlaid with bitter dark chocolate ending in an abrupt, astringent finish. Adding a little water highlighted some buttery caramel notes that weren’t too apparent before. The peat level is on the milder side, reminiscent of Talisker. The body is light, and would make me guess it was a blended Scotch in a blind tasting.

I can picture a group of friends, sitting around a campfire in the Oregon wilderness, passing a bottle of Clear Creek McCarthy’s Single Malt and enjoying is mild and quiet demeanor. Approachable and not complicated, it matches the informal and casual spirit of Oregon.

Clear Creek McCarthy’s Single Malt is for peat enthusiasts and novices alike. The smoke is pleasant and not too intense, along the lines of Talisker or Bowmore. It also lacks typical Islay whisky  notes of salinity and brine, and while that might be a negative for some, it’s also the characteristic that makes this more unique. A great representation of craft whiskey from the Pacific Northwest. Recommended.