With the synergistic rise of craft brewers and craft distillers all around the country, it isn’t surprising to see ‘mash-ups’ (pun not originally intended), so to speak, with beers aged in whiskey barrels, and whiskey produced from beer mash. Whether collaborative between distilleries and breweries, or solo efforts, it seems to result in at worst creativity, and at best some really unique and wonderful spirits and beers.

Chicago Distilling Company is one of those hyper-locally focused craft producers, distilling Illinois-sourced organic grains in small batches into hand-crafted spirits, exploring niche varieties and not veering away from the creative or unusual. Owned by brothers Jay DiPrizio and Jay’s wife Noelle, Chicago Distilling was formed with inspiration from Noelle’s family history of making moonshine. Each of the three owners entered the business without previous beverage industry experience, and started with at-home experimentation before opening the doors to Chicago Distilling Company in 2013.

Production today includes vodka, gin and whiskey, as well as canned cocktails. In addition to its Blind Tiger bourbon, Chicago Distilling has a line of American single malt whiskeys inspired by beer (and conversely, other breweries have apparently used Chicago Distilling’s barrels in beer production). This beer-inspired line includes a Dunkel, a Rauchbier, a Belgian Dark Strong ale and a Stout whiskey – the latter of which distills the brewed mash of a stout and creates Chicago Distilling Company’s Stouted Single Malt. 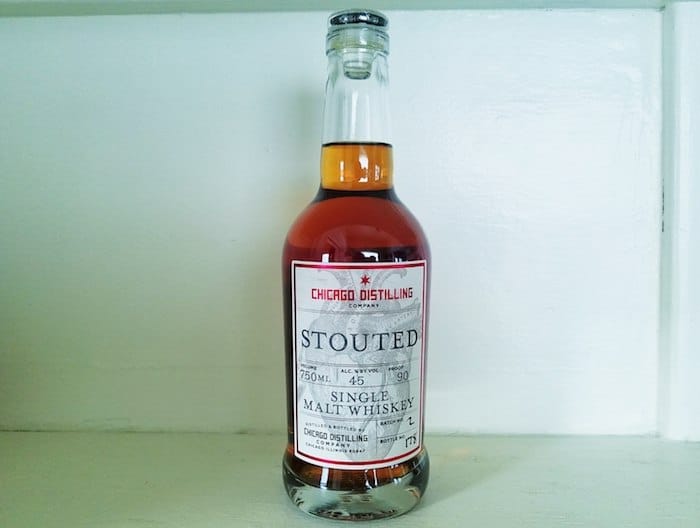 Vital Stats: While limited specifics are available, according to the distillery it is “90 proof whiskey produced at not exceeding 160º proof from fermented mash of not less than 51% malted grain distilled at one distillery.” The one I sampled was marked as batch #2, bottle #178. It’s bottled in a beautiful, glass-corked 375 mL bottle and retails for about $35.

Palate: The funk of the nose continues in the mouth. There’s a hint of peanut sauce, with a murky aftertaste. Notes of malt and chicory are hugged with dank. A few splashes of water did lend an improving touch of brightness.

The richness of a stout in theory would lend itself delightfully to a whiskey, but this one fell short for me. It’s a great concept that could use some finessing in execution. Some whiskeys pull it off while still young, others benefit from and transform with age. I’m not sure whether more aging would be a game-changer here, or if some alterations earlier in the process might elevate this a bit. In the world of stout-whiskey mashups, Jameson Caskmates Stout Edition (previously reviewed on The Whiskey Wash) is more readily available an interesting comparison, albeit marked differences – of note, that Jameson was aged in stout-seasoned barrels.