Whiskey Review Round Up: Cherrywood-Smoked Whiskeys

As the American craft whiskey market grows, more and more distilleries are experimenting with new styles of whiskey, using techniques that set them apart both from Scotch and Irish expressions as well as the traditional American categories of bourbon and rye. These techniques include things like Corsair’s freaky experiments with unusual grains like oak and quinoa, as well as the growing ubiquity of aging in barrels that once held everything from port to cabernet.

Another (optional) step in the whiskey-making process that offers room for experimentation is smoking. Where in the British Isles, barley has long been smoked over peat fires, more and more American distillers are using smoke from a range of different woods, from mesquite to olive to apple, to lend a unique character to their expressions. One wood that’s catching on with a number of small distilleries is cherry.

In this capsule review, though, we’ll be focusing on three cherrywood-smoked whiskey expressions, all American malt whiskeys: Square One Brewery and Distillery’s JJ Neukomm Missouri Malt Whiskey, Do Good’s Cherry Wood Smoked Whisky, and Long Islands Spirits Pine Barrens Cherrywood Smoked Malt. Instead of giving each a numerical score out of 100, we’ll simply rank the three against each other on a five point scale. 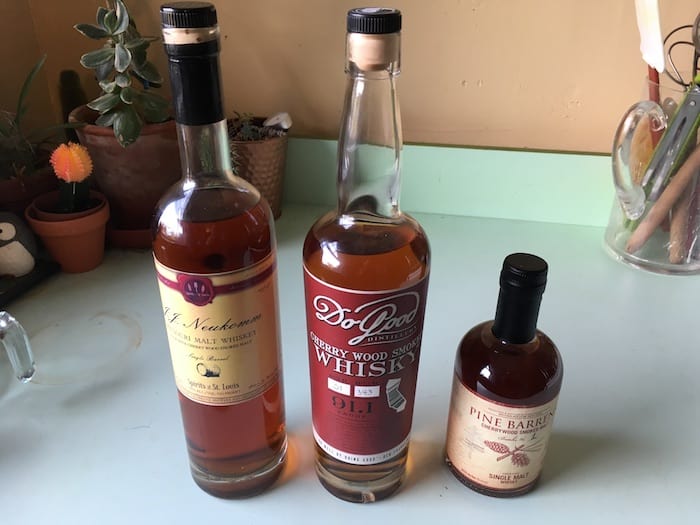 This expression from Do Good Distillery in Modesto, California, is made with “just enough cherry wood smoked malt to give [it] its own personality,” though there’s no information out there on exactly what that means. It’s bottled at 91.1 proof and priced at around $50 a bottle. Although this is obviously fully irrelevant to quality, I really like the clever label design—the ends of the label are cut so that on the back of the bottle, an outline of the state of California appears.

Appearance-wise, this first expression is a deep, reddish copper (all three, actually, are almost exactly the same color). On the nose, this is a big, pushy, savory whisky, all smoke and white pepper and smoked meat. On the palate, I get some subtle stone fruit softening the smokiness, along with a nice toasty grain note. Oak on the finish.

Score: 3/5 [SHOP FOR A BOTTLE OF DO GOOD CHERRYWOOD-SMOKED WHISKEY]

This one, from Square One Brewery and Distillery in Saint Louis, seems to be the least cherrywood-heavy of the three, with only 25% cherry-smoked malt; the rest of the mash bill is unsmoked malted barley. It’s a single-barrel expression aged in Missouri oak and bottled at 45% ABV. It’s also the cheapest of the bunch.

Again, in terms of color, this expression is very close to the other two—in the glass side-by-side with the Do Good whisky, I can’t tell the difference. The nose opens quite sweet, heavy with butterscotch, honey, and vanilla. There’s just a hint of smoke, along with a light white pepper note and some grain, but with just a cursory sniff, I could almost mistake it for a bourbon. As it sits in the glass and opens up, though, those heavier notes come out more.

On the palate, it’s more savory, with more white pepper, some smoke, and a sturdier grain note. I also get a decent amount of oak on the finish, and—again, I hope I’m not imagining this—a little cherry. It’s definitely the lightest-bodied of the three, though it’s by no means watery.

Our final sample, from Long Island Spirits, is a 100% cherry-smoked single malt. We get a few more vital stats on this one than the Do Good: it’s at least one year old, aged in 10- and 30-gallon new American oak barrels, and bottled at 95 proof. It’s the most expensive of the three.

This whiskey is just the barest shade deeper in color than the last one: a nice rich coppery red. On the nose, it’s an enticing mix of bready biscuit, juicy dark fruit, caramel, and light smoke. Palate-wise, the grain comes across more as toast, and there’s more fruit—I want to say I’m tasting cherry specifically, but there’s a very real chance I’m projecting. I also get some tasty burnt sugar, like the top of a crème brulée, and substantial oak on the back of the palate. It’s got a velvety texture.

Score: 5/5 [SHOP FOR A BOTTLE OF PINE BARRENS CHERRYWOOD-SMOKED MALT]

Not one of these cherrywood-smoked whiskeys is bad, and I’d drink any of them again. The winner, though, is definitely the Pine Barrens. It’s very well-balanced, with a deep, intriguing flavor profile ranging from smoke to toast to fruit. As for the other two, the race is close. Personally, I think I prefer the Missouri Malt to the Do Good, but only just. The latter is big and in-your-face, where the former is soft and on the sweet side. The more I sat with it, though, the more facets I started to notice, whereas the Do Good was a comparatively one-note experience.

In the end, though, it probably comes down to personal preference—if you like bold, smoky highland whiskies, go for the Do Good, but if you’re a bourbon drinker, you’ll probably prefer the Missouri Malt.

133
Shares
1.4k
Views
Share on FacebookShare on TwitterGet Our Newsletter
Get The Macallan® Rare Cask at ReserveBar. Shop now!