Whiskey in Chattanooga, Tennessee has a long and turbulent history. Back in the 1800s, there were at least 30 distilleries operating in the city, which were all shut down during prohibition. It wasn’t until 2013 that the legislature in Hamilton County changed the law to allow distilling again. Before that, in 2009, Chattanooga Whiskey Company was founded, and has been aging spirit that was actually produced in Indiana.

Despite an unfriendly historical political climate, Chattanooga Whiskey Company is blowing up. At the Tennessee distillery, they have made over 150 batches of whiskey since spring 2015. They are also building out a gigantic new facility in downtown Chattanooga right on the river that will make them one of the largest spirit producers in a state known for big whiskey makers. That building is set to open in 2017.

Currently, Chattanooga Whiskey Company has three labels: 1816 Reserve, Cask, and Single Barrel. The two former are reviewed here. They all use the same grain bill: 75% corn, 21% rye, and 4% malted barley. They are aged both in new American charred oak barrels, and then bottled based on character, typically predicted by their position in the barrelhouse.

Head distiller Grant McCracken chooses Reserve whiskey from spots in the room that are cooler and more humid. This means a greater amount of alcohol evaporates compared to water, leaving a lower proof and larger quantity of spirit in the barrel. The Cask release is chosen from areas that are hotter and less humid, which makes the water and alcohol evaporate at similar rates, leaving a higher proof and more concentrated spirit in the barrel. 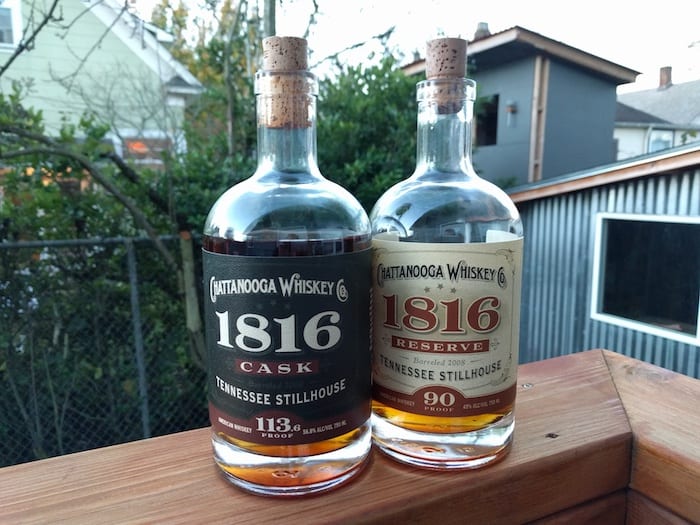 Palate: In the mouth neat, I first notice a light-medium body. A candied apple sweetness emerges, and is followed by raw wood and a very present bitterness. It finishes pretty fast, but leaves the wood and bitterness in the upper register as the final impression.

A couple drops of water smooth it out, brings the sweetness up a notch, and reduces the wood and bitterness. There is also a welcomed lavender component to the aroma. The overall impression is much more open and integrated. The finish has a leafy/earthy note that lingers.

A splash for water clears room for a touch of smoke on the palate, and it finishes much more quickly.

I enjoyed this bottle, and it could be used for a range of experiences. The bitterness when drinking neat was difficult to tolerate in multiple sequential pours, but that was easily solved by a few drops of water, which is the recommended experience. Doing so took the bitterness down and allowed the flavors to synthesize.

Appearance: Red-amber, with medium slow legs. Looks mahogany in the bottle, a bit lighter in the glass.

Palate: Neat, there are notes of cinnamon and toasted marshmallow, with a really deep mouthfeel and significant fire, although not as much as expected given the proof. Medium long finish, with high notes that are a ghost of the nose, and sweet corn on the tongue. It’s a bit tannic and woody.

A few drops of water makes it rounder, less fiery, and adds brown butter and vanilla on the nose. The heat is turned down and there is a fruit punch character to it, and the finish is more drying.

A splash of water makes the nose really bright with orange zest, and reduces the heat almost completely. It really brings the brown sugar forward, and adds chocolate Halloween candy. Very nice, and it finishes very clean with a hint of fresh corn on the cob.

I really liked this whiskey. There was a depth and complexity that continuously revealed new flavors, and was easy drinking considering the proof, but is still a night-ender. A splash of water is the recommended experience to bring out the chocolaty and sugary notes and that fresh summer corn finish.