Editor’s Note: This whiskey was provided to us as a review sample by Chattanooga Whiskey. This in no way, per our editorial policies, influenced the final outcome of this review. It should also be noted that by clicking the buy link towards the bottom of this review our site receives a small referral payment which helps to support, but not influence, our editorial and other costs.

Although I wasn’t quite of legal age when the “Bottled-In-Bond” distinction first came around, I do remember when it re-emerged into our current nomenclature. I was talking with my mentor at the time about what we were seeing happening in the bar world, and most of the conversation had to do with whiskey and bourbon coming back. Forget all the Lemon Drops, Cosmos, and Mojitos that had been our major function. Now, it was time to re-learn to make a proper Old Fashioned. And I remember him saying that soon we will have to see better whiskey than we had been if it was going to stand up in the cocktail, some higher proof, or some bottled in bond.

Figuring that I was not familiar with the term, he went on to give me a brief overview of what Bottled In Bond had meant, but went on to also state that the term is “archaic” and that many distillers don’t use it anymore and that now it just generally means 100 proof.

I understood what he was saying to me, other than the “archaic” part. To me that sounded like a class I needed to sign-up for at Hogwarts. Looking back on it now, it’s almost as if I was getting to see a glimpse into the future. I sure have made a lot of Old Fashioneds since then. While bottled-in-bond (BIB) means much more than just 100 proof, it doesn’t serve the same purpose as it was originally intended; however, it has given many brands a benchmark to express themselves in creative ways.

Chattanooga Whiskey has recently announced and released a permanent addition to their family of brands: Bottled In Bond Vintage Series. The Bottled in Bond Vintage Series is a single season, vintage-dated blend of whiskeys released from the same distilling season. The brand is known for using a high malt mash bill (at least  25% malted grains) and also for their experimentation when it comes to aging and finishing. The attempt behind this vintage series is to create a blend of some of these different expressions that showcase a depth and complexity that is greater than the “sum of its parts”

And they break down very specifically what those parts are. The Spring 2017 Vintage is made up of a blend of four previously released expressions from the distillery. They include:

All of these components are stated to have been barreled from January to June (spring distilling season) in 2017. I am not exactly sure how they get to f years of aging to meet the BIB standard, with all of the individual releases having been stated as having been aged for 2+ years. Semantics aside, I am very intrigued by the creative approach to putting together this release, so let’s get to tasting. 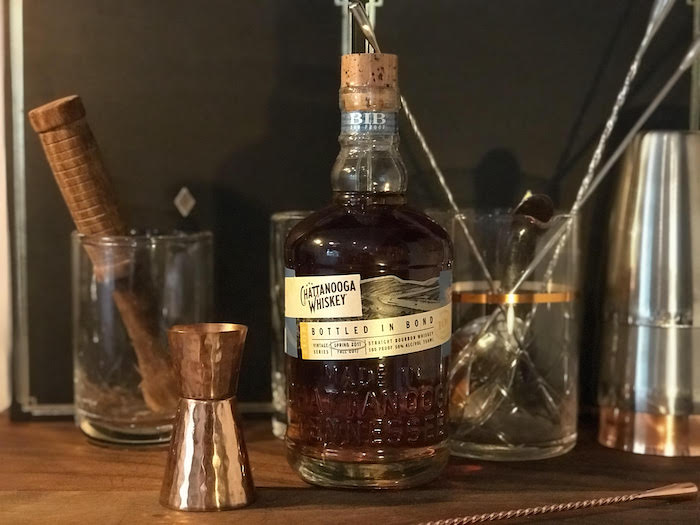 Vital Stats: 100 proof (50% ABV). A blend of four previously released expressions from Chattanooga Whiskey all barrelled in the Spring of 2017. Mash bills detailed above. MSRP of $49.99 for a 750ml bottle.

Nose: Sweet and mostly mellow, with a hint of acetone.

Palate: High astringency at first. You get all the ingredients of a pecan pie once it settles in; brown sugar, molasses, pecans, a little corn syrup, with a hint of campfire smoke as well.  A long, highly astringent finish pulls you back to the first sip.

This offering really had an impressive packaging and a lot of detail as to what all went into putting this together. I almost feel as if the preview spoiled too much of the actual feature with this one. I was looking forward to something really funky, or at least to get to understand their “Tennessee High Malt Style”. It was enjoyable and I am glad I had the opportunity to try, but it left a little to the imagination.