Editor’s Note: This whiskey was provided to us as a review sample by Chambers Bay. This in no way, per our editorial policies, influenced the final outcome of this review.

Chambers Bay Distillery (CBD) first began producing whiskey in University Place, Washington in 2014. The company was founded by two close friends, Jeff Robinette and Alan Davis, and only has four products, but in keeping things simple, they’ve been able to innovate in interesting ways. These include their flagship products – Straight Bourbon, Greenhorn Bourbon, Ghost Dog Whiskey, and Rán Vodka – and each of them have distinct characteristics that set them apart from other spirits in their categories. For example, their vodka is a wheat vodka, made with sea salt from San Juan Island, and their Ghost Dog Whiskey is infused with ghost peppers.

Most interestingly, though, is how they age their bourbons. The company claims that through a process called hydrokinetic aging, which basically means aging their whiskey on a boat for a period of time, they’re able to age their whiskey more efficiently, and also add a little salt to the flavor profile from the salty ocean air.

In their own words, “the wave and tidal movement created by the hydrokinetic energy expedites the aging process by increasing the interaction of the spirit and the wood inside our charred new American-oak barrels.”

There are lots of ways to rapidly age whiskey, but not many distillers are trying some type of aging on a boat, besides most notably, Jefferson’s Ocean. It seems backwards to think that traditional whiskey wasn’t always aged in a rackhouse, but actually, Kentucky whiskey produced before the advent of modern roads and rail-systems often travelled by boat along the Mississippi and its tributaries or even across oceans to reach its destination, partially aging on the water along the way.

Regardless of how we feel about the expedited aging process, it seems scientifically sound that spirits will take on more color and flavor based on the increased contact with the barrel. Chambers Bay is a good example of how aging on the water might add a delicious spin on a traditional style. 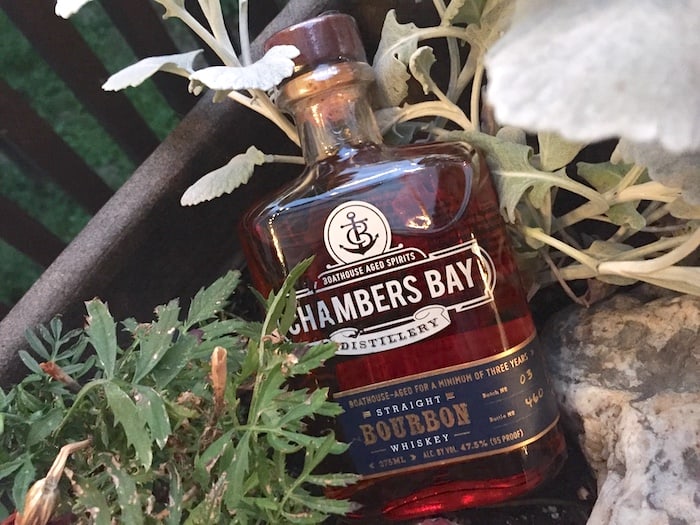 Vital Stats: Straight bourbon made entirely in Washington, aged for a minimum of three years in a boathouse on the Puget Sound. It is 47.5% ABV (95 proof), and a bottle costs around $40 for 375 ml, or half of a regular 750ml bottle. My sample is batch 03, bottle number 460. The mash bill is made up of corn and wheat.

Appearance: The color is lighter than I expected, since the claims are that aging on a boat with the constant rocking motion should extract color and flavor from the barrel. It’s a solid medium chestnut brown color with regular, medium legs.

Nose: It definitely smells a lot like the ocean. Sandy earth and salted caramel taffy, with bright notes of lemon peel and toasted oak. It smells like a cold, offseason boardwalk with wafts of cotton candy, popcorn and salty ocean air blowing in the breeze.

Palate: Salty, sweet with a bit of heat. The mouthfeel is smooth and silky. Sweet floral notes of lavender and elderflower lead into spicy hot notes of cinnamon red-hot candy, charred oak, and dried dark cherries. The finish is long and warm, leaving a lingering tingle in my mouth, although it tastes more and more like charred smokey wood as the finish rounds out and disappears after about one solid minute.

Chambers Bay Straight Bourbon Wis a unique expression of one of America's most beloved spirits. Before learning about their hydrokinetic aging process, I had never even considered aging whiskey on a boat. I appreciated the mini history lesson I gave myself about boat-aged whiskey and other rapid aging techniques. The whiskey tasted and smelled juicy and flavorful, and I liked everything except the lingering charcoal finish. I would definitely this again.