Editor’s Note: This whiskey was provided to us as a review sample by Cedar Ridge. This in no way, per our editorial policies, influenced the final outcome of this review. It should also be noted that by clicking the buy link towards the bottom of this review our site receives a small referral payment which helps to support, but not influence, our editorial and other costs.

The Quint family has been making booze of one form or another since the 1600’s. The Swisher, Iowa Quints make whiskey (and wine, and rum, and apple pie liqueur) and have been since 2005, under the label Cedar Ridge Whiskey.

Being Iowan, they started as a bourbon outfit, given that Iowa grows America’s most beautiful and starch-laden corn. Around 2015 they introduced an American single malt, and that spirit’s descendant is today’s matter at hand.

I asked Murphy Quint, head distiller, how they became malt makers. His dad, Jeff, was always a scotch lover, and Murphy’s distilling teeth were cut at Stranahan’s, the notable Colorado single malt distillery. It also made sense for competitive advantage: “Most other whiskey distilleries, their heads are down in bourdon and rye,” said Quint. “They aren’t paying attention to single malt. With our passion, interest and ability to compete in this market, there was a huge opportunity.”

Being attached to a winery certainly helps build that case. “We have lots of casks: ex-red wine, ex-port, ex-white wine, and, the barrels are still wet, so we get a lot of character from them. Everything we do here influences the flavor and aroma of the single malt – it’s encompassing of the whole company.”

Cedar Ridge The QuintEssential American Single Malt Whiskey is, of course, made from only malted barley, and this two-row pale barley comes from the cradle of Canadian grain production: Biggar, Saskatchewan (“New York is big, this is Biggar”) and is malted by Prairie Malt Limited. Why use Canadian grain? “We built a really strong relationship with the Prairie Malt facility,” said Quint. “We were really impressed with their quality, so we’ve renewed their contract every year.”

American Single Malt is a contested category. Or really, a non-existent category, if you ask the Alcohol and Tobacco Tax and Trade Bureau (known affectionately as the TTB). So, while it might seem weird that American Single Malt can be made with Canadian grain, well, you can do what you want when there aren’t official standards.

The process to make Cedar Ridge The QuintEssential is nuanced, indeed, and unique among American lines. It starts as a typical grain-to-glass whiskey, with its nearly beer-making process, lauter tun and all. The difference is made in the resting. For the first phase, the whiskey is aged using ex-bourbon barrels. It then gets a second round of aging in barrels that once held brandy, rum, wine, port or sherry. Finally, barrels are blended in the distillery’s oak solera vat to marry. 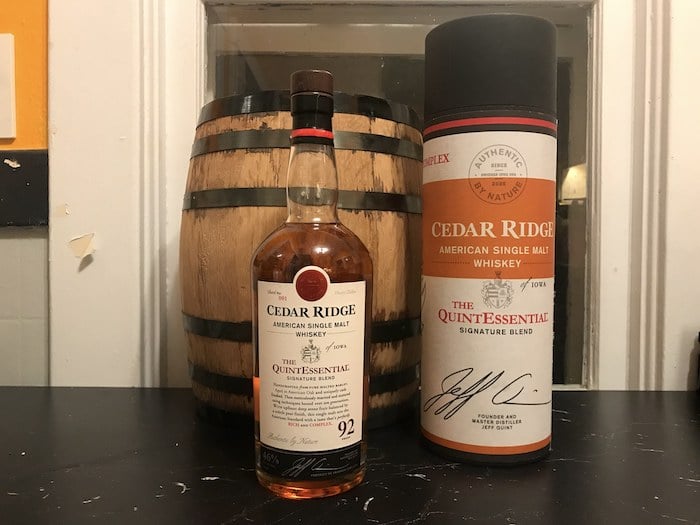 Vital Stats: Cedar Ridge The QuintEssential American Single Malt is made from 100% malted barley and bottled at 92 proof. The age is undisclosed due to solera method of production. Find it in select US markets at $60 per 750 mL bottle.

Appearance: The liquid is a very clear, pale honey, slow to bead and form thick tears.

Nose: On the nose, it’s spicy with cinnamon sweetness and sarsaparilla. Unripe peach and fresh mountain air waft through and are joined by tea biscuits and milk chocolate. It’s deeply fragrant for a single malt.

Palate: The body is lean, yet the attack is vanilla ice cream. Spice carries through on the mid-palate, darkening toward sandalwood. Black tea hits the back-palate, the fragrance carrying through for a long finish.

At first sip, I am shocked by how good this whiskey is. NOT because it's from Iowa, because it's from America and has 'single malt' in its name. It falls somewhere between a single malt and a bourbon, with some of the best bits of both. You can taste it's made with care. Now I want to taste everything they make - the bourbon, the wines, even the apple pie liqueur.