Editor’s Note: This whiskey was provided to us as a review sample by Catskill Provisions. This in no way, per our editorial policies, influenced the final outcome of this review. Also, we previously reported Finger Lakes Distilling was the source of the whiskey itself, but that is incorrect and we’ve adjusted the review to reflect that.

Locally produced honey is generally awesome. Whiskey is a good thing. Bees are important to the environment and are one of the main pollinating insects on the planet. Bees and their hives are responsible for making honey.

Catskill Provisions is a honey producing company located in a corner of the Catskill Mountains in New York that specializes in a small variety of different honeys as well as an infused whiskey. The owner and proprietor, Claire Marin, was born in Madrid and raised in New York City. After finding successes in the corporate world, she opted to switch gears and move to the small town of Long Eddy in the Catskills and start beekeeping as a hobby.

As will happen with hobbies, one becomes more passionate about their project, and the beginnings of a business occur. Fast forward to the present and Marin is working with other local beekeepers to maintain over 300 beehives and selling small batch honeys to local businesses.

The whiskey for this review, of which the source is not mentioned, is a rye offering that’s blended with a touch of late summer honey made by the gang over at Catskill Provisions. Their goal is to produce a uniquely flavored whiskey, highlighting elements of both local ingredients. The final product has won some awards as well, including the Winner of the Chairman’s Trophy and a 94 rating from the prestigious Ultimate Spirits Challenge 2017 and a Gold Medal at the 2017 SIP Awards. 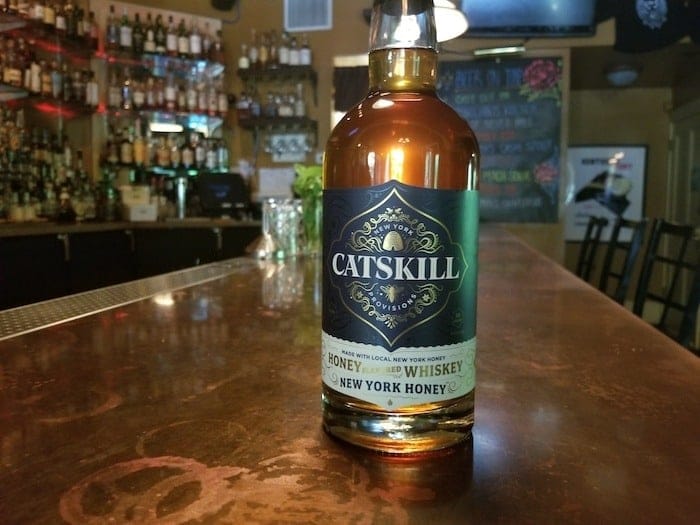 Appearance: On the lighter side of a burnt orange, reminiscent of Earl Grey tea.

Nose: Right away found aromas of toffee and honey. Looking deeper found some candied orange as well as floral essences.

Palate: Viscous and full bodied. A definite shock to the palate with those bold, sweet honey flavors that give way to a kiss of rye spice. The whiskey is straightforward for the tasting experience, even with the addition of water or ice.

I was truly hopeful that this one would be tasty. I can imagine it, an artful blend of honey with ideally a big rye spice to balance it all out. However, the honey element was way too overpowering. I was able to find a touch of the rye influence somewhere in the background.

But time and again, the sweetness and viscosity just kept on taking front stage. Not in a good way. The flavors sit on the palate for a while, just continuously reminding you it's still there, and for me that's not necessarily a good thing.