Editor’s Note: This whiskey was provided to us as a review sample by Catoctin Creek Distilling. This in no way, per our editorial policies, influenced the final outcome of this review. It should also be noted that by clicking the buy link towards the bottom of this review our site receives a small referral payment which helps to support, but not influence, our editorial and other costs.

Aging makes a difference. It allows the flavors to mature. The whiskey pulls flavor and color from its surroundings in its final phase of maturation loaded with potential. With Catoctin Creek Distilling’s release of their signature Roundstone Rye Whiskey in a cask proof bottling, we get to peak behind the curtain a bit to find a rich, full bodied whiskey that pulls the drinker in with the promise of unique sugar notes like maple and more.

It is said the American tradition of distilling whiskey began in Virginia. Regrettably, prohibition tore down the infrastructure within that state to such a degree that it was not until 2009 that distilleries reemerged from the ashes. Enter, Catoctin Creek with its founders, Becky and Scott Harris. This is a case of two individuals with a passion for spirits, coming together after years in the tech and industrial marketplaces to express their appreciation for spirits in a whole new way. 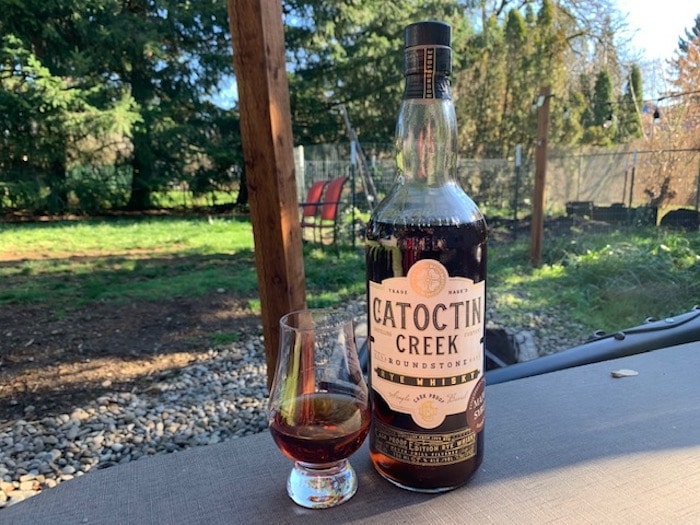 Vital Stats: Finished in a single maple syrup barrel, only 248 bottles were released in this small batch of  59% ABV cask strength rye whiskey.

Appearance: This whiskey is dark like red, wood varnish.

Nose: Rich notes of brown sugar and maple syrup come to the front on the first sniff. After a few huffs the rich tang of raisin, accented by orange peel and clove shine forth along with a final malty note.

Palate: At such a high proof I was not surprised that this whiskey was spicy. Neat, the flavors hit all at once. I had to slow down to take in the cavalcade of impressions that flooded my mind with every sip. There was malt, maple syrup and molasses for sweetness, and those rich spice notes that came out in the nose.

One thought I had was that this whiskey is reminiscent of eating a buckwheat pancake with melted butter and a healthy dose of syrup. The heat was subtle for its proof and its sharpness never got in the way of the flavors. It is well balanced between its spice and sugar notes and there is a bit of black pepper on the very end. The one flavor that hung around was maple syrup.

Catoctin Creek Roundstone Rye Cask Proof "Maple Finished" is thoughtful and complex without being pretentious. This is the sort of whiskey that can open or close an evening with plenty of interest to explore in every sip. Going on 11 years of operation seems to have honed the idea of what style of flavors this company wants to present to the world. That impression is of quality and boldness of flavors. And I applaud them for their focus on what is truly important with whiskey. Flavor.