Cask & Crew Blended Rye is a semantically ambiguous sourced whiskey out of Rochester, New York. The brains of the operation is food and drink outlet LiDestri, which, when it comes to spirits, seems to be a bottler that sources booze and packaging for third-party customers. Cask & Crew, on the other hand, is a label in LiDestri’s own portfolio.

I say “semantically ambiguous” because this whiskey is labeled as a “51%/49% blend of fine three-year-old Canadian rye and classic barrel aged American corn whiskey.” The ambiguity there, of course, comes from the meaning of “Canadian rye.” Canadians use the term differently than we do, to mean any whiskey produced in Canada, regardless of mash bill. Reportedly, though, the Canadian portion of Cask & Crew also meets the American definition of a rye, meaning it was made with at least 51% rye in the mash.

In essence, then, if not by the letter of the law, this looks something like an American rye whiskey. Or maybe it looks like a Canadian whisky, as many Canadian whiskies are made with a high proportion of corn. In any case, it’s pretty clear that we should expect this blend to strike a balance between spicy and sweet.

There’s not a lot of other information available on this whiskey. It’s one of three in the Cask & Crew line; the other two are flavored whiskeys that use the same base, although the marketing material euphemistically refers to them as “corrected” to get around the potential negative connotations of “flavoring.” 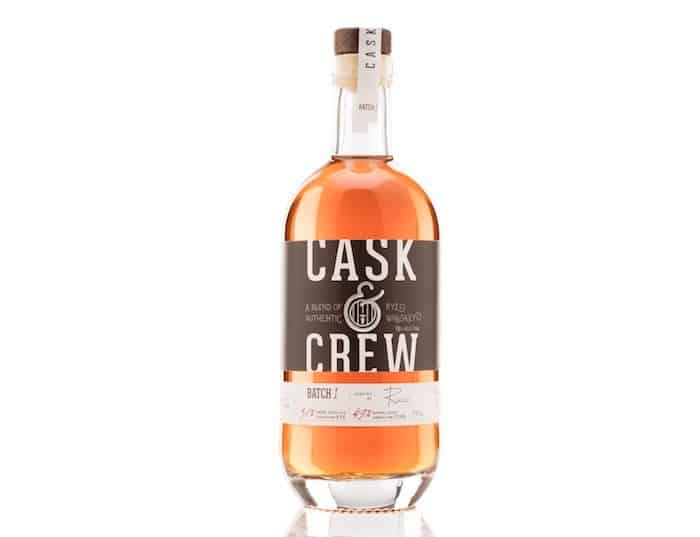 Nose: Caramel, vanilla, some soft oak. After a few minutes in the glass, I get some warm spices and juicy red fruit.

Palate: Spices are prominent on the palate, along with caramel. Oak predominates on the back palate, and continues through the finish. There’s some lingering bitterness. Tends toward oily on the palate.

This whiskey is an acceptable choice for mixing purposes, but I wouldn't want to sip it. It starts out fine, but the finish is woody and bitter in a way that almost feels like it leaves a film in your mouth. If you'll indulge a moment of intense snarkiness, I can see why, in the company's own terminology, they might have wanted to "correct" some of that bitterness with a dash of walnut toffee flavoring.

This is one of those expressions that really hammers home the cliche about whiskey being mostly about slick marketing: a somewhat (but, it should also be said, not completely) unique concept to catch customers' eyes, a "handcrafted" look to the label, and an absolutely mediocre spirit.