Editor’s Note: This whiskey was provided to us as a review sample by Western Spirits Beverage Company. This in no way, per our editorial policies, influenced the final outcome of this review. It should also be noted that by clicking the buy link towards the bottom of this review our site receives a small referral payment which helps to support, but not influence, our editorial and other costs.

Kentucky! What do you think of, besides bourbon? How about…horses? As we have mentioned previously, slapping on a race horse and jockey on the a bottle of whiskey brings an immediate association! It’s like a rebus for bourbon. Kentucky.

The Calumet name also closely ties to horses. William Monroe Wright established Calumet Farm in 1924 on a small farm in Lexington, Ky., after making a fortune in baking powder. After Wright’s death in 1933 his son Warren began to move the farm’s business toward Thoroughbred racing, and it became known for its winners: Calumet Farm produced two Triple Crown winners, eight Kentucky Derby winners, and eight Preakness winners. They also have 11 horses in the National Museum of Racing Hall of Fame.

We’ve mentioned Calumet Farm before on the site, like in a review of another one of their whiskies, Calumet Farm Bourbon Whiskey. We have also talked about how it’s sourced Kentucky bourbon label owned by Western Spirits Beverage Company.

Now, their 14-year-old Calumet Farm Single Rack Black 14 Year Old Bourbon Whiskey bourbon is out, and it’s kind of exciting. It comes from just 19 barrels that are aged in a single, center cut rack, for what the brand calls the ideal maturation location and conditions inside the rick house. 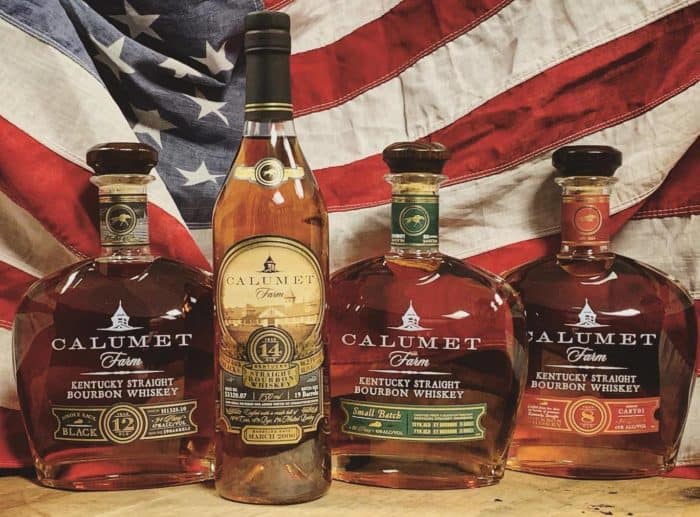 Nose: The nose is smooth. What do I mean? I mean there’s nothing hot or alcohol-like on the nose. There’s cherrywood. New shoe leather. Cherry like deep dark meaty cherries. That’s what this is like. Also, a surprise! Oreos. The classic ones. Not double-stuff. Not Hydrox, or Newman-Os.

Palate: Dang, this is nice. The cherry carries through, as does the smoothness. No burn. A mouthfeel that is just right: neither too light nor too gluey thick. It doesn’t taste of alcohol, although it has a slight kick of rye and cinnamon on the finish. That’s what makes it interesting. There is ginger, too—spice, not heat. I like it when whiskies start one way and finish another. They don’t all do that. This one does.

For $115 or thereabouts, maybe it should? Still, I think it’s worth it.We all need a splurge, sometimes.

The word that comes to mind is “skilled.” Picking the horse theme back up: This whiskey has got legs. It can go the distance. This was barreled in March 2006 and it shows. All that time did great things for this whiskey. Thumbs up, drink up (responsibly, of course).