Editor’s Note: This whiskey was provided to us as a review sample by Buzzard’s Roost. This in no way, per our editorial policies, influenced the final outcome of this review. It should also be noted that by clicking the buy link towards the bottom of this review our site receives a small referral payment which helps to support, but not influence, our editorial and other costs.

I have been told previously to try to leave personal anecdotes out of reviews. But I can’t not for this one: Upon seeing the name of this whiskey to review, I immediately thought of my late mother.

Long before Seinfeld coined “Top of the Muffin to you!” we were there first, with what she deemed “Buzzard Cake.”

When I was a kid, we used to bake cakes (box mix only, please: mom was not a scratch cook or baker) and once they were done on a pan that she inevitably forgot to grease pre-cake, we would pick off the shiny top of the cake and leave the rest to dry and crumble off, eventually making it into the trash. Not real proud of this, but it’s my childhood (inert shrug emoji).

Buzzard’s Roost whiskey started slightly later in the timeline: about two decades ago, when its founder and master blender Jason Brauner decided to educate people about whiskey, opening Bourbon’s Bistro and, as their website mentions, “pioneering the idea of barrel selection for restaurants.”

Buzzard’s Roost works closely with their cooperage and uses proprietary barrels to create certain flavor profiles by creating different levels of char. Once the whiskey is selected, it is re-barreled using said barrels and aged in Kentucky warehouses. Their sixth release since launching in 2019—which we detailed back in June—is a peated barrel rye. This rye is double-barreled in new oak barrels lightly smoked using Scottish peat.

I went into this with a little trepidation, not only caused by the name but also by the review which mentions that Brauner refers to this whiskey as a “Scotch lover’s rye.” My tastes tend to lead less peaty and more…well, let’s just say, not peaty. But hey: Life is nothing if you don’t expand your horizons. 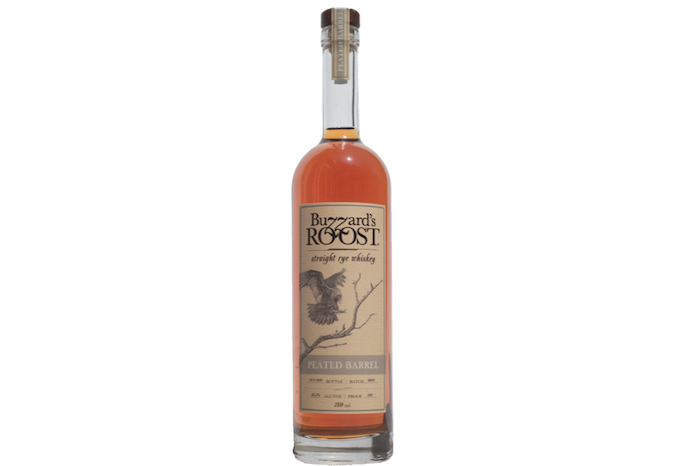 Appearance: Clean motor oil. And the color of oak floors when the sun shines on them during a day when there’s smoke in the air, making everything a little more orange than usual.

Nose: Sweet. Very vanilla bean-ey. Magnolia Bakery buttercream icing in vanilla swirled atop the cake like a lofty updo. Light campfire smoke. Hot raspberries, as in a warm raspberry cobbler yet to be buzzarded.

Palate: Cool! Well, hot, actually. I like this more than I expected. It does not taste low-proof, however. And it finishes hot.  There is that warmth of spice. It’s not smoky like a burnt taste, which I appreciate. But it does have a long finish and the very tail end—like a tail of a very long comet—does finish with a slight peaty dirtiness, but if I can handle this, so can you. The sweetness on the nose continues through on the palate. There’s a little licorice/anise on the finish, too, which is not my favorite flavor but it’s tempered really well. It’s a bare hint, a mere whisper. It has a multi-flavor complexity in its finish, but upfront it’s a little flat, but it does finish pleasantly. I’d give this a 4 but I do think it’s slightly too hot. This is another time where I could give it a 3.75 if I could, but let’s agree on a 3.5 with promise.

I found myself not wanting to like this, but I can’t help that I do. I hate the name and love it at the same time.