Editor’s Note: This whiskey was provided to us as a review sample by SanTan Spirits. This in no way, per our editorial policies, influenced the final outcome of this review.

SanTan Brewing Company started back in 2007 and were part of the pioneering craft beer movement. They began canning in 2009 and are well known throughout Arizona. Their distribution reaches to New Mexico, southern California and beyond. They’re privately owned and operated and are now also one of the 20 or distilleries in Arizona!

It took several years of experimentation but 2018 saw the release of a whiskey and two vodkas, embarking them into the spirits side of the industry as SanTan Spirits. As with so many fresh distilleries, having clear spirits available was a good choice to help pay the bills. They set up a deal to distribute through Young’s, a power house for getting your product out into the market place, but also feature their own products in their downtown Chandler restaurant. Chandler is a city just outside of Pheonix, Arizona that boasts a handful of parks and a pretty solid culinary scene where SanTan fits in well as a craft brewery/distillery/eatery.

With the intense dessert heat and dry air found in Arizona, they can’t simply copy the methods of Kentucky bourbon distilleries. One of the tools they’re using is barrel proofing. As the aging process goes along, they add water to the barrel to lower the ABV, which allows more wood sugars to dissolve because those wood sugars are water soluble, not alcohol soluble. They also proof their whiskey in vats and then return them to the barrel. By doing this process slowly, they can fine tune their flavor profiles.

For this rye whiskey, it’s bottled at cask strength so my assumption is that no barrel proofing is happening. When it says cask strength, I expect it to be mostly untouched from barreling to bottling. (Side note, their press releases for this expression describe their barrel proofing method, which for me creates some questions about what their production process really looks like… I guess I need to go visit to learn about it in person!)

They are using malted barley with “just a kiss” of corn, to balance the fruity rye spice. In aging conditions like this, the barrel can become overwhelming quickly, so I think their approach is well thought out. Distilleries with brewery backgrounds often produce spirits with grain forward profiles because they’re used to making tasty beer. Since you’re basically distilling a form of beer to make whiskey, the brewer’s personality shines a little more than your typical whiskey maker.

This cask strength rye has won a few gold medals and most of their spirits seem to be well received in the competition world. Their experience making beer translates into an expectation of quality that appears to produce some really nice products. Next time I’m cruising through Arizona, I’ll have to stop by for a full flight. 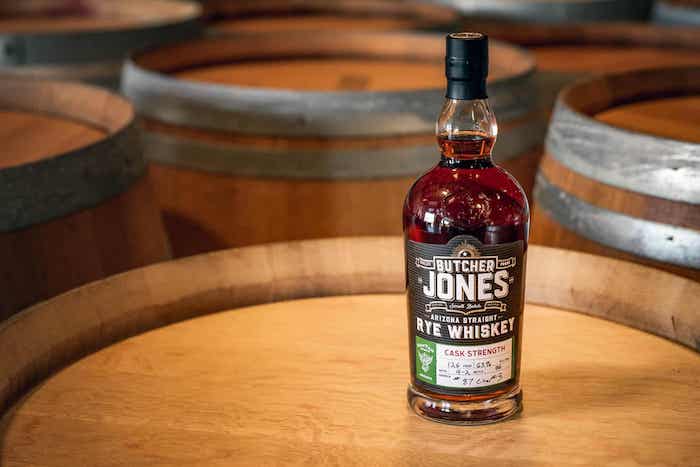 Palate: At proof it is mouthwatering and light – almost fleeting, with a slightly medicinal finish. The palate agrees with the nose, adding a bit more grain, nut and wood character. It needs water to fully experience. After adding a little we find butterscotch, rosemary, clove and a touch of red fruit such as cherry. Nice dry finish with plenty of rye kick.

This whiskey has a lovely nose and proofs down to a pretty nice sipper, but it doesn’t wow me enough to score higher than a 3. While the cask strength does show the barrel very well, it is a bit too hot to enjoy at the 63.2% it’s bottled at. The palate is good, but not incredibly complex.

Overall a nice whiskey worth trying, but I’d be curious to try it their other products. This expression has scored highly at the San Francisco World Spirits and New York World Wine & Spirits competitions so there’s a chance I’m missing something here.