Editor’s Note: This whiskey was provided to us as a review sample by Bushmills. This in no way, per our editorial policies, influenced the final outcome of this review. It should also be noted that by clicking the buy link towards the bottom of this review our site receives a small referral payment which helps to support, but not influence, our editorial and other costs.

If you’re looking to be a whiskey blender, Bushmills’ master blender Helen Mulholland feels for you. In an interview with Scotch Whisky magazine, she states “‘The role of blender comes up maybe once in a lifetime – we tend to stay. It’s really unfortunate for other people because you’re there for 20 years or so, and there’s very little movement in these divisions.” But we’re not sorry to see – or taste – her success. Mulholland is the first female master blender in the history of Irish whiskey – a history that goes back centuries. Even as the spirits industry integrates slowly, you’re still likely to count female master blenders and distillers in the single digits.

This hasn’t slowed or diminished Mulholland, who didn’t even intend to end up in whiskey. After taking an internship at Bushmills during her Food Technology degree, she accepted a position right away, and then again after completing her master’s degree. After becoming master blender in 2005, her “passion” has been specialty casks, such as the exclusive acacia single malt. Mulholland’s work has earned her a singular honor – being the first woman inducted into Whisky Magazine’s Hall of Fame, for which she is “hugely delighted and honoured.”

And that’s not the beginning nor end of it for her or Bushmills, with a long history behind them and lots of new and exciting projects in the works. Bushmills is the first licensed whiskey distillery on the planet – and possibly the first whiskey maker. Their distillery was registered in 1784, but Bushmills also puts claim to a license from 1608, as well as a distilling history back to the 15th century. If all claims are true, which is quite possible, it could finally award the Irish the contested title of inventors of whiskey. The evidence, however, is not solid enough and will probably never be able to substantiate any of these claims.

Regardless of the exact origins, Bushmills continues to be a leading Irish whiskey maker. The distillery differs from other Irish whiskey makers by focusing on malt distillation as opposed to single pot still, including their extremely well-regarded and award-winning single malt line. This Cognac cask-finished expression is the first of a new annual line of “rare cask” single malts combining a long aging with specialty cask finishing (in this case this whiskey was first aged in former bourbon and Oloroso sherry barrels for 11 years and then finished in the ultra-rare Cognac casks for 17 years).

To accommodate their growing demand and product range, Bushmills is in the process of putting up new warehouses and building a whole second distillery. A major factor in their expansion has been the purchase of the distillery by Proximo, most well-known for brand Jose Cuervo.

With the increased world-wide demand in Irish whiskey and the influx of innovation – and funds coming from Proximo – Bushmills is set up to put out some truly great products in the next few years, and a lot of them. The distillery continues to remain true to their method of triple distillation and using malted barley, but what else is coming is anyone’s guess. One thing we can be sure of: it’s gonna be great. 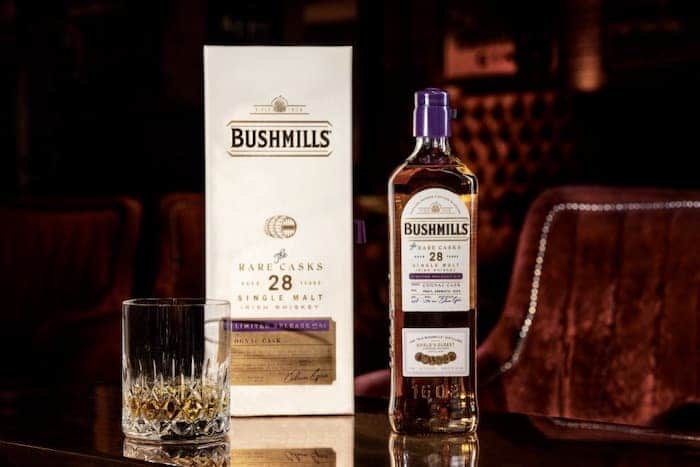 Nose: Fruity start, both juicy and jammy, leading into dried fruit and the sweeter notes of toffee and cocoa.

Palate: Bright, juicy peach right away. The fruitiness lingers but mellows into a citrus element. The finish is nutty and rich, thanks to that cognac cask, and lasts a while with strong baking spice notes. A little water increases the richness, but I personally didn’t care for it as you lose some of that fresh fruit taste up front. The texture remains light and delicate through the whole taste.

You couldn’t taste this whiskey and not know it’s Bushmills. The peachiness is very reminiscent of their 16 Year Old Single Malt, which is a pleasant surprise for its 28 year age. Older whiskeys tend to lose some of that vibrancy in place of richer tones, but Bushmills is giving us both in this complex bottle. This expression is a real treat, a special occasion sipper that will be very hard to leave on the shelf.

I’m giving this bottle a 4.5 because it’s exceptional, yet Bushmills is still on deck to out-do itself in the future. This expression is only the first of this rare cask line, and already they’ve given us a spirit with finesse and character. To say I’m excited for what’s next is an understatement

4.5
User Rating 2.86 (22 votes)
Sending
44
Shares
7.5k
Views
Share on FacebookShare on TwitterGet Our Newsletter
Cheers to the Dads! Personalize a bottle of his favorite whiskey to create a modern gift for the modern man. Use code: FATHERSDAY20 for $20 off your next order of $100 or more at ReserveBar