Editor’s Note: This whiskey was provided to us as a review sample by Brother’s Bond Bourbon. This in no way, per our editorial policies, influenced the final outcome of this review. It should also be noted that by clicking the buy link towards the bottom of this review our site receives a small referral payment which helps to support, but not influence, our editorial and other costs.

Brother’s Bond Straight Bourbon: the whiskey that broke the Internet (OK, one of them). Such a hubbub happened when Ian Somerhalder and Paul Wesley of The Vampire Diaries announced the name of their long-awaited whiskey collaboration, it made me wonder what they’d been doing for the years before to create such a devoted fan base. After all, Brother’s Bond was released more than two years after Diaries’ last episode.

Somerhalder is from Covington, Louisiana, where he was the middle child of three. With his mother’s blessing, he began modeling at age 10 and scored his first big acting role at 22 on the Warner Brothers’ series Young Americans.

His breakout role happened in 2004: Lost. Though one of the first actors to be hired, he was also the first major character to meet his demise. He did some movie work thereafter, but that end left him open to be cast on Diaries in 2009, his home for the next six years, and his fateful dovetailing with Wesley.

I have a feeling his philanthropic side is something that deepens that fan dedication: he cleaned oiled seabirds during the Deepwater Horizon disaster and was instrumental in letting the public know how they could help. He supports animal welfare and sustainable agriculture, and is part of the It Gets Better Project, helping uplift LGBTQIA youth.

Wesley also has a charitable bent, raising funds for the Humane Society of the United States. His acting resume is a little more robust than Somerhalder’s, and began with Guiding Light at just 16.

Wesley was born Pawel Tomasz Wasilewski, changing to his current name in 2005. He spent a third of every year in his parents’ native Poland and has the language skills to show for it. Growing up in Marlboro Township, New Jersey gave him access to the stages of New York, where he cut his teeth in many early performances. Appearing in Diaries seems to have set off a cascade of film offers, since many of his credits are after its 2009 debut.

On the show, Somerhalder and Wesley play brothers Damon and Stefan Salvatore who like to unwind after fighting over their mutual love interest or hunting prey by enjoying a nice whiskey together. According to them, Brother’s Bond is an homage to that shared delight and to the relationship they’ve cultivated over the years.

With everything else they have going on, the two didn’t actually distill this bourbon, but hand-selected the batch that was a “big, warm hug of robust flavors.” My sample came with recipes, an actually decent tasting guide and a surprising swag t-shirt: ladies’ cut, scoop neck, bamboo fiber (in case there was any doubt who the target market was). 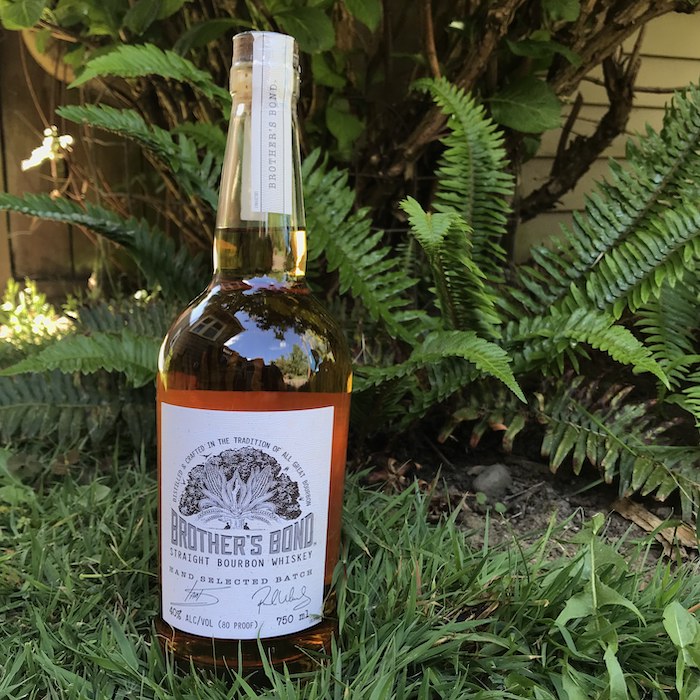 Vital stats: Brother’s Bond Straight Bourbon Whiskey is 80 proof and made from 65% corn, 22% rye, and undisclosed amounts of wheat and barley. It’s aged four years in oak barrels with #4 char on the staves and #2 char on the heads. Have a 750mL shipped to AZ, CA, NM, NV, OR and WA for $44.

Appearance: This bourbon is a very clear, medium amber that forms medium tears.

Nose: The nose is redolent of sweet peach and clover, light banana peel and an underpinning of cigar box.

Palate: Spice on the palate only hinted at on the nose: allspice and clove. The mid-palate blooms to honeyed almond. You’ll find more spice on the finish with the barest hint of tannin.

This whiskey surprised me! I tend to discount the celebrity spirits phenomenon as something more meant to take money from the star-struck mainstream consumer (and not from such a cultivated aesthete as myself) and less an honest attempt to put out a good product. But this whiskey is well-integrated and easy drinking, with enough punch to keep it interesting.