Editor’s Note: This whiskey was provided to us as a review sample by Infuse Spirits. This in no way, per our editorial policies, influenced the final outcome of this review. It should also be noted that by clicking the buy link towards the bottom of this review our site receives a small referral payment which helps to support, but not influence, our editorial and other costs.

Don’t cry over broken staves. There’s a bright future ahead of them at the Broken Barrel Whiskey Company.

Quick recap: staves are the plank-like pieces that comprise a wooden barrel, such as the type spirits or wine are aged in. By mixing different types, multiple barrel influences can be used to finish whiskey simultaneously, and those percentages can be altered barrel to barrel  (Maker’s Mark is also employing this technique for their Private Selection series).

This method could be thought of as an infusion, which is fitting considering Broken Barrel is a label out of Infuse Spirits, a company specializing in infused spirits and bitters. Staves present a higher surface area than full barrels, making them ideal for this “infusion.” The infusion is done to finish the whiskey, which has been distilled in Owensboro, Kentucky, and aged at least a year in virgin oak.

Broken Barrel uses a standard “oak bill” of 40% French oak/40% ex-bourbon/20% sherry to finish their original bourbon and rye line (which we reviewed here). Since the original line they’ve released the Single Oak line to include staves from Mizunara oak, Islay Scotch, and Amontillado sherry (which we have also reviewed, here).

This Port-finished bourbon is part of the new Reserve Oak series. This series starts with cask strength Kentucky bourbon, which is then finished in steel with one of four different stave finishes – Port, rum & rye, stout, or peach brandy. The Reserve Oak series goes even further by being available by the custom barrel, with the consumer getting the ultimate say in the stave ratios.

This particular bottle comes from a barrel chosen by whiskey subscription service Flaviar, with a chosen oak bill of 80% Port and 20% French oak. Broken Barrel distinguishes the Port as “American Port” – a bit of a misnomer as true Port only comes from Portugal. Port-style wine would be more accurate, designating a sweet, fortified, fruit-forward wine.

Fruit is definitely present in this bottle, but not in the way Port-finishing affects Scotch or Irish whiskey. The stronger, sweeter flavors of bourbon still make their way through, aided by the rum cask and spiced by the rye in both the cask and the mash bill. Together these flavors create more of a candied fruit element, fairly unusual in the world of bourbons.

This label from Infuse Spirits is doing something really interesting, and speaks to a trend in bourbon whiskey to shake up the way things have been traditionally done, pushing towards new flavors and methods. 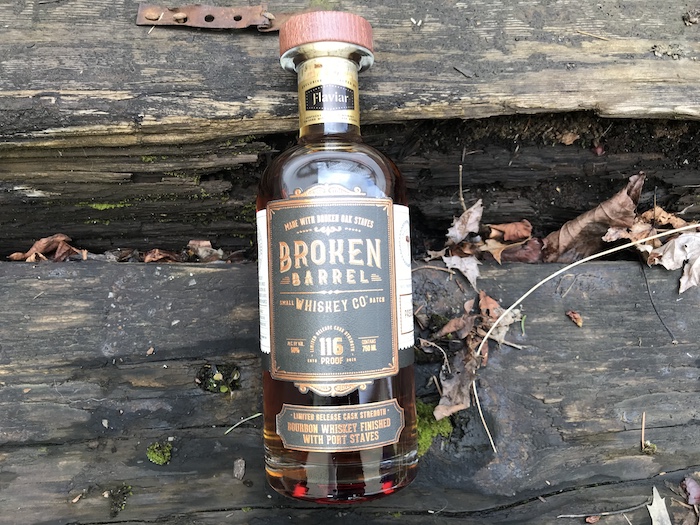 Appearance: Honeyed amber, almost to the point of being orange. Many slow legs.

Nose: Fresh whipped cream deepens into brown sugar. Raisin notes and a bite of oak trade back and forth on the finish.

Palate: Fairly thick texture, and some bitterness right off the start. A pop of buttercream gives way to Turkish delight, with a float of red wine bitterness. The finish is fairly quick with blanched almond and celery leaf. A few drops of water takes the edge off the bitterness and brings out a candied sweetness, with the overwhelming flavor of Queen Anne’s cordial cherries.

My ears always perk up when I hear about a Port finish. This bottle presents something outside the norm of bourbon finishing, and the Port influence does make a difference. The whiskey as a whole, however, falls a bit short. The cask finish is a little too hot when matched with some of the bitterness of the expression, and while the water mellows that, what’s left is very one-note.