Editor’s Note: This whiskey was provided to us as a review sample by Boulder Spirits. This in no way, per our editorial policies, influenced the final outcome of this review. It should also be noted that by clicking the buy link towards the bottom of this review our site receives a small referral payment which helps to support, but not influence, our editorial and other costs.

Boulder Spirits is based in—surprise!—Boulder, Colorado. As we have previously reported, ten years ago Alastair Brogan moved from Scotland to Colorado with a 1,000 gallon copper still (referred to as a Forsyth still, the largest in Colorado, and pretty badass, actually) and the desire to make a traditional single malt. But you can’t move to America and not think about not making bourbon, right? But how do you do that while incorporating your Scottish roots?

You make a very barley-forward bourbon.

Although all bourbon must have a mash bill of at least 51 percent corn, the rest is up to the maker. Boulder Spirits bourbon whiskey of course has that minimum 51 percent of corn—with 44 percent of barley and 5 percent rye bringing up the rear. They find that it gives their bourbon a smooth, fruity taste. It’s aged in #3 charred oak barrels.

This review is part of a series of six and explores Boulder Spirits Straight Bourbon Whiskey Sherry Cask. This whiskey is aged two years in virgin American oak, and then moved into casks that had once held sherry for at least another year. 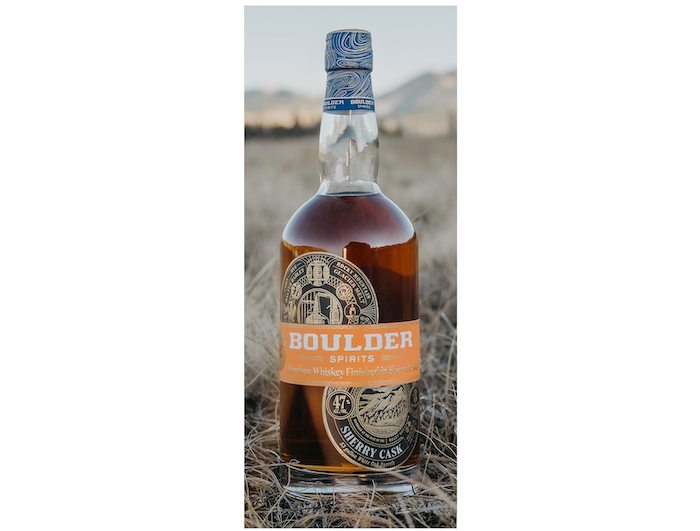 Nose: There’s definitely sherry in the nose. It’s kind of floral and perfumy–it sort of smells like an elegant hand sanitizer, if that makes any sense. There’s also a little bit of something herby, like mint. And basil.

Palate: This is a little acrid, and intensely floral on the palate. It reminds me of the John Mullaney bit about drinking perfume. It tastes like how the water that you’ve had flowers in smells: high floral–and too alcoholic for me.

I really wanted to like this because I generally enjoy cask-finished whiskeys, but this was not one of them.