Editor’s Note: This whiskey was provided to us as a review sample by Beam Suntory. This in no way, per our editorial policies, influenced the final outcome of this review.

Long before the Booker’s Roundtable was established, legendary Beam master distiller Booker Noe would sit at his kitchen table to read the daily newspaper or tinker with projects. Mostly, the kitchen table didn’t just serve as a place to eat a warm meal, but also did double duty as a place where Noe would select his batches of bourbon with friends and family. Booker’s son, Fred Noe, and the Booker’s Roundtable members, in the spirit of this, last year made their barrel selections to create Booker’s Batch 2018-04 “Kitchen Table.” Fred Noe states,

“This batch is named in honor of an iconic family heirloom that played an essential role in the creation of my dad’s namesake bourbon 30 years ago.”

While Booker Noe passed away in 2014, his legacy of creating small batch bourbon lives on. The kitchen table that many surrounded to help select new batches of Booker’s still sometimes continues to influence how things are done.

The fourth batch, and final release of 2018, is a blend of six barrels from three production dates and three warehouses. Hand picked by Fred Noe and the Booker’s Roundtable, the barrels breakdown as follows: 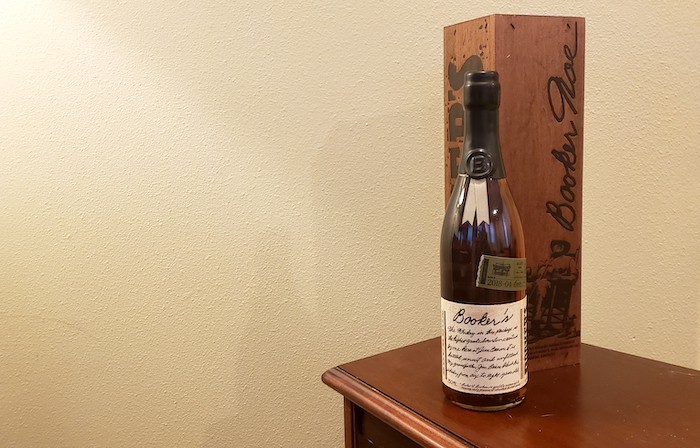 Nose: Neat– Right from the unopened bottle, it smelled like cherry scented nail polish remover. It needs a little time to breathe. Once settled, the proof doesn’t singe the nose, and a heavy amount of baking spices and marzipan hits you. Reminiscent of pecan pie with its sweetness and nuttiness. This one is abundant with fruit, such as, peach, apple, pear, orange. I am just picturing a fruit bowl sitting in the middle of Noe’s kitchen table.

With water/ice– Bright citrus and cherry lead the way with marzipan underneath. I get grandma’s lemon meringue pie. A touch of toasted pecan and coconut can also be found.

Palate: Neat– Upon first sip, it’s intensely nutty on the front end. The mouthfeel is heavy and oily, which you can see in the legs just suspended on the glass. It doesn’t feel like you are drinking, but rather chewing your way through the whiskey. On the back end, the bourbon is very astringent and herbaceous. Where the front was more subdued, the finish is bitter and sharp with a slight sweetness and those baking spices from the nose. After the sip, you’re left with a dry mouth riddled with oak.

With water/ice– The nuttiness is more subtle, and then a lot of cinnamon comes through. There is still quite a bit of bitterness, and with the herbaceousness it’s like drinking black tea with whiskey. It drinks a bit hotter, but still is manageable as high proof. The finish is grassier, but I feel like I’m still chewing the bourbon. The faint butterscotch that stays on the breath is quite nice and distracts from the heavier oak and straw flavors.

The nose on the Booker’s Batch 2018-04 “Kitchen Table” is incredible, and absolutely lovely. I can appreciate the sentiment behind this batch of Booker’s, but it’s pretty average for sipping. With all the nostalgia for Booker’s real kitchen table and the memories behind it, I was expecting something more from this batch. At least it doesn’t taste like an old oak table.

For being 128 proof, it doesn’t seem that high or hot when sipped neat. Adding water, as Fred Noe suggests, intensifies an herbal bitterness that is quite unappealing. I do like the flavor as it sips neat, but the heavy mouthfeel gets in the way. This one has equal pros and equal cons.