Editor’s Note: This whiskey was provided to us as a review sample by the Backbone Bourbon Company. This in no way, per our editorial policies, influenced the final outcome of this review. It should also be noted that by clicking the buy link towards the bottom of this review our site receives a small referral payment which helps to support, but not influence, our editorial and other costs.

The very first Nobel Prize in Physics was awarded in 1901 to Wilhelm Conrad Röntgen. The gentleman was chosen to receive this honor “In recognition of the extraordinary services he has rendered by the discovery of the remarkable rays subsequently named after him.” In much of the world, his discovery is still known today as Röntgen Rays, but they are probably more familiar going by the name that he gave to his unknown find as X-rays.

So how does this historical anecdote relate to a whiskey review? Well, maybe not directly, but they do share some coincidental similarities. They both involve a good bit of scientific knowledge in order to produce, they were both discovered during experiments for other purposes, and the methodology is pretty much unchanged from when they were both discovered.

Now, when it comes to whiskey, I’m referring specifically to the time after the fermentation and distillation processes are complete when the spirit ages in wood. The chemical process that happens to a spirit as it sits in a wooden vessel is only partially understood. Yet there has also been much study to replicate or speed up the process to achieve the desired results, but for the most part, the relationship between time, spirit, and wood has remained unchanged.

When Backbone Bourbon Company first launched Bone Snapper Rye in 2011, the target age for bottling was around 30 months. The makers decided to set a small amount of the original batch aside to continue to age. That spirit, which has the same mash bill and is aged in the same type of barrels as the standard Bone Snapper Rye, is released after the four year mark as Bone Snapper Straight Rye Four Year reserve. The title of ‘X-Ray” refers to this release being a closer look into the bones of the whiskey – a more mature, fully developed snapshot of the original creation. This draws another similarity between radiology and the aging of whiskey: it’s all about finding the sweet spot of how long to expose the subject to the process. 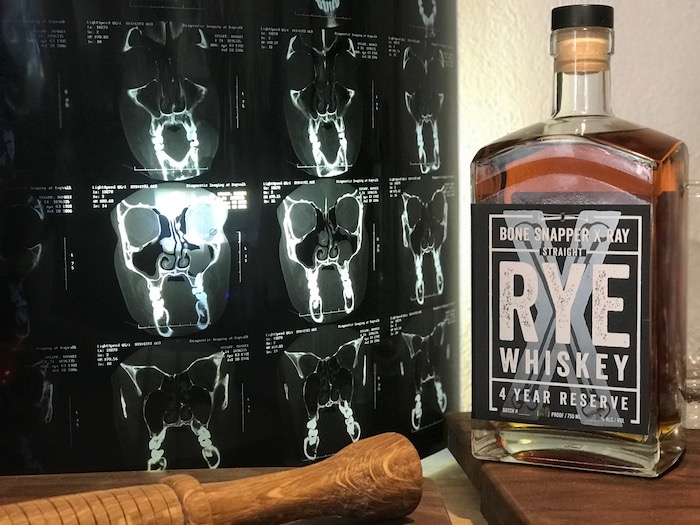 Appearance: Light, candied ginger on top mellows out to a yellow orange, similar to a yellow carrot

Nose:  Musty sandalwood and vanilla extract with hints of resin and rose

Palate:  Burnt sugar, caramel, clove and cinnamon all bounce off each other in a pleasing way.  A long, tannic finish with a hint of bittersweet at the end.  Reminiscent of burning incense.

X-rays exist on the electromagnetic spectrum beyond our ability to perceive them. Bone Snapper X-ray Straight Rye Whiskey, however, seems to attempt to hit every note on the flavor spectrum. “Busy” is often used as a descriptive term to refer to a whiskey that has a lot going on flavor wise. This one might be called hyperactive. The high proof and extra aging definitely reveal more beneath the surface.