Editor’s Note: This whiskey was provided to us as a review sample by B.R. Distilling Company. This in no way, per our editorial policies, influenced the final outcome of this review. It should also be noted that by clicking the buy link towards the bottom of this review our site receives a small referral payment which helps to support, but not influence, our editorial and other costs.

When I lived in New York (yes yes, it’s one of those stories), I used to walk by the Blue Note Jazz Club all the time. And when I did, I imagined one day I’d meet a guy who would take me there and we would be impossibly cool together. Like, we would bop our heads to the music—but subtle. We’d sit there and let the music wash over us—but chill. But then I became an adult in mind as well as body and realized that 1) I don’t like live music and 2) I have no chill and 3) I don’t like guys who like jazz. All good.

Also? Until I started writing this review, I didn’t even know what a blue note was. So I looked it up: “a variable microtonal lowering of the third, seventh, and occasionally fifth degrees of the major scale.” So that is something that might as well be in Farsi. Further research tells me it’s a note that’s a slightly different pitch than what you’d expect. That makes sense, that’s what jazz kind of is, right?

But how does that apply to whiskey? A taste that zigs when you expect it to zag? Maybe.

Last summer, we learned Memphis, Tennessee-based B.R. Distilling Company would be putting out a new, more reasonably priced bourbon: Blue Note Juke Joint.  The goal is this whiskey is to give Memphis blues a shout-out. A riff on what you might expect in whiskey. The Juke Joint part to show what a casual kinda drank this is—unfussy, perfect in the kind of establishment (i.e., joint) where music’s played on a jukebox—maybe even the kind of jukebox that’s a little quirky, you know, where you have to hit it just right, where it’s easily hacked to play the same tunes over and over? Maybe.

Where was I? Yes, yes. The whiskey. It’s a Kentucky straight bourbon whiskey aged a minimum of three years. It’s got a mash bill of 70 percent corn, 21 percent rye, and 9 percent malted barley. Unfiltered, it comes in at 93 proof and it’s crafted in Memphis, though I’m unclear where it’s sourced from. It also enjoys a lower price point than Blue Note’s other whiskies, too—a little more than half of their Small Batch Bourbon. How does it rank? Let’s find out. 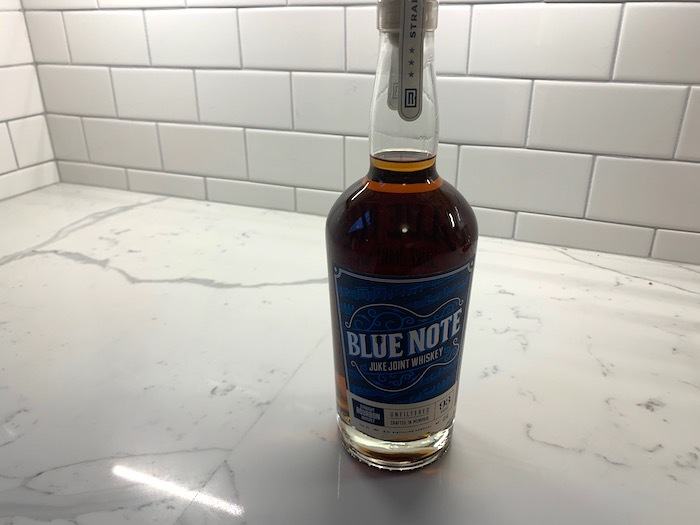 Appearance: Gold into copper. Like a new penny that you run by on the street and notice when it’s too late to pick it up and then wonder if you will have bad luck the rest of the day. Or one of the light flecks or striations in a tiger’s eye stone.

Nose: The nose is straight-up lively. Want to get up and dance? A whiff of this may make you want to do it. It’s got promise. There’s a lot happening. Not like the blues where there is too much happening and there is like a riff on everything and you don’t know where to focus or even if you should and it…can get annoying. This is more like elements of a party, but a good one, with the right mix of guests. What does that smell like? Well, it smells like pound cake, lemon icing that’s the perfect balance of powdered sugar and milk and lemon zest, caramel, Nilla wafers, and fresh cream. Not a bad mix, right?

Palate: I’ll be honest. I was expecting to like this less than I did. I liked it! It zigged and zagged in pleasant ways! This is not going to blow you away or make you ponder upon its complexity. It’s a decent bourbon that will hold up fine in a drink. And there is something to be said for that. Is this a contemplative sipper? It is not. Is it a blowout party in a glass? It is not. It’s not a rager, but it’s a party you kind of drag your feet on attending and then are pleasantly surprised. The nose is a little better than the palate, which finishes decently, if a little menthol and just the slightest bit like the burnt end of a moxa stick. But if you were to put this in a Gold Rush or a whiskey sour or a riff on a penicillin? This would hold up just fine. For $30, it’s a fine choice.

Like a good partygoer, you can take this whiskey somewhere and it will hold its own just fine. You don’t have to keep checking on it to make sure it’s ok. It’ll do well in whatever mix you try and give it. It’s not a wallflower.