Editor’s Note: This whiskey was provided to us as a review sample by Lux Row Distillers. This in no way, per our editorial policies, influenced the final outcome of this review. It should also be noted that by clicking the buy link towards the bottom of this review our site receives a small referral payment which helps to support, but not influence, our editorial and other costs.

Time for another intentionally scarce fan boy collector’s whiskey! Luxco has been pumping out the Blood Oath (really?) series since 2015. They’re known for sourcing the majority of their whiskey (“he has sworn to never reveal where he finds his bourbon”), and Pact No. 6 is no different. Every Pact is a blend, and each one includes some special barrel resting. Each proof matches the ‘normal’ temperature of human blood, 98.6 (OK, I can’t resist a number pun, so that is a little fun).

Luxco is a well-funded project and home to many recognizable labels: Rebel Yell bourbon, Exotico tequila, Pearl vodka, actual Everclear. Their whiskeys are housed under Lux Row Distillers, and though the timeline carousel of their ‘Our Story’ page gives the ancient origin point of many of the brands they bought up, Lux Row itself has maybe been around just a short amount of time. Following the success of their brands, they built a working distillery right in Bardstown, KY in 2018.

Head of blending is John E. Rempe, a company man: “Rempe brought his objective approach and discernible [sic] palate to Luxco more than 17 years ago.” Before his Luxco hire, Rempe earned a BS in Biology, became a certified food scientist and worked in soft drinks. His first jobs with his new employer included quality-control work in the lab, and research and development of ready-to-drink cocktails. His whiskey labors began when the company picked up Rebel Yell in 1999.

As for the specifics of this particular release, what you have in the bottle, according to the brand, is “a 14-year ryed bourbon with notes of oak and leather, melded with an 8-year warm toasty ryed bourbon and complemented them with a 7-year ryed bourbon rested in cognac casks.” 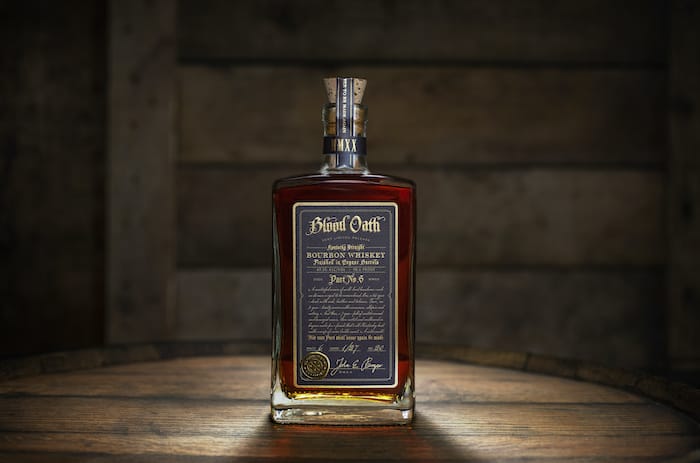 Vital Stats: Blood Oath Pact No. 6 is bottled at 98.6 proof and is a blend of three whiskeys: a 14-year ryed bourbon, an eight-year ryed bourbon, and a seven-year bourbon rested in Cognac casks. Mash bills, proportions and the length of rest are undisclosed. Find a 750mL for $100; distributed globally in limited edition.

Appearance: This whiskey is medium honey in the glass, and quickly forms medium legs.

Nose: The nose is candy sweet, the best corn-on-the-cob of the year, with a touch of saline.

Palate: The flavors of the palate are soft, but the heat is strong considering the proof. Plum and dark cherry are immersed in a clean agave syrup sweetness, with apple juice on the mid palate. Sweetness manages to hit my whole tongue, even the back palate – strange in my experience. An herbal bitterness builds along the sides. The whole effect, though, is a little watery and thin.

This whiskey is fine. I tasted it apropos of not very much and found it lacking. After reading all the fanfare and sipping a bit of the marketing Kool-Aid, I really expected something richer. It’s not something I would go out of my way to get my hands on, and I wouldn’t dump my glass in a potted plant, either.

3
User Rating 4.2 (5 votes)
Sending
65
Shares
4.2k
Views
Share on FacebookShare on TwitterGet Our Newsletter
Cheers to the Dads! Personalize a bottle of his favorite whiskey to create a modern gift for the modern man. Use code: FATHERSDAY20 for $20 off your next order of $100 or more at ReserveBar