Editor’s Note: This whiskey was provided to us as a review sample by Blaum Bros. Distilling Co. This in no way, per our editorial policies, influenced the final outcome of this review.

What happens when two brothers quit their jobs and start making whiskey? That could spell disaster. Or, they could become the darlings of bourbon fanboys the world over. Brothers Matt and Mike Blaum experienced the latter. We chatted recently and they gave me a little peek inside these strange and wonderful few years.

“We quit jobs that had nothing to do with this, and we’re still doing this six years later. We’re thankful for what got us here,” said Matt Blaum. “It’s amazing walking by a barrel, thinking, yesterday we filled that. And then we’re bottling it. This is our dream.”

Neither brother has a formal distilling education. As you’ll see on their website, they eschew the hipster vests and complicated facial hair of some of their contemporaries. Matt Blaum was describing his business casual: “You’re most likely to see us in t-shirts, shorts and flip flops – ” when Mike Blaum broke in and assured me “Steel-toed boots only on the distillery floor.”  I wonder who keeps the OSHA records?

Blaum Brothers is currently available in five central states, with plans to expand slowly into others. “We’d rather do the markets we’re in well than half-ass a bunch of markets,” said Matt Blaum. “We made more bourbon than anyone recommended. We are selling every drop that we have; everything’s allocated at this point.”

Much has been made of late craft-whiskey whisperer Dave Pickerell giving them a hand. Explained Mike Blaum: “We knew Dave through American Craft Spirits [Association]. We didn’t have him develop everything, we had him come out after we were established to see what were doing, give us some feedback, some validation. We were – what? – one and a half years in at that point. He tweaked some hardware; designed a barrel storage rack for us.”

Matt Blaum continues “There’s this vast knowledge in the industry. We learn from [other distillers,] old books, old research papers on distillation techniques. Dave’s validation was worth its weight in gold. But it’s all out there for anyone to learn.

“With the buzz the Knotter line created [the initial offering was an MGP-produced 12-year-old bourbon] – that made us a household name in the bourbon community. We were excited about the exposure. Then we put out our own bourbon and it wasn’t a complete flop. It’s in our hands to screw up.”

The plan forward is for steady and thoughtful expansion. “We just purchased property three miles down the road with a 15,000 square foot barn,” said Matt Blaum. “That’s our new rick house. Everything is in 10,000 square foot total right now. The new barn will allow for 2,200 barrels, and it’s on seven acres, so when we fill that one up we can build another.”

He elaborated: “We were never those guys who wanted to just get whiskey out on the market. We wanted to do this ourselves, for ourselves. [Using] 53 gallon barrels; long age time. We’ll have bourbon, single malt that will be over 10 years old. We’re keeping those barrels under lock and key, not taking one out to pay the water bill.”

By the start of 2020, the brothers plan on releasing strictly their own distillate, and that spirit will only be getting older. “Our main flagship will continue to carry the four-year-old age statement, but will eventually be a blend of four, five, six and seven-year-old barrels,” said Mike.

Sounds like there are good things in store, and that makes me and the bourbon fanboys pretty pumped. 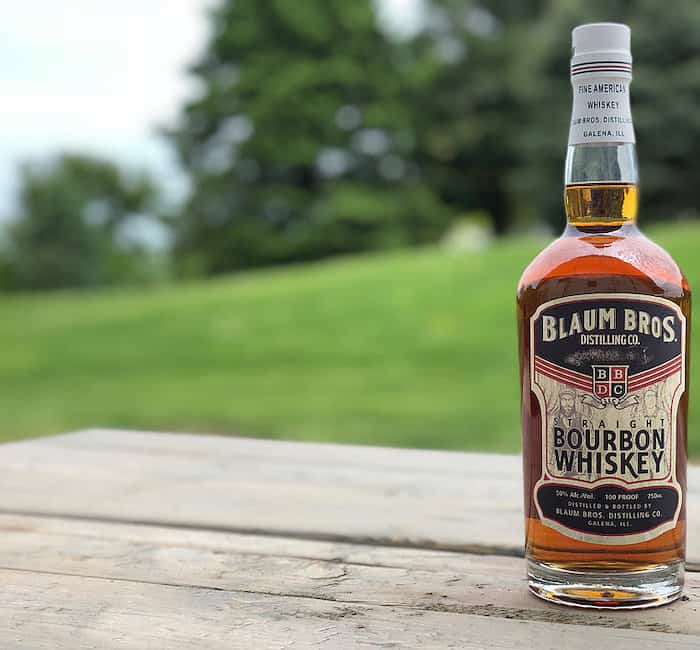 Palate: It’s prickly on the palate, with sweet, spicy notes of nutmeg and grains of paradise. Vanilla tones of the nose bloom into underside of creme brûlée crust. Orange peel spreads across the mid-palate. The finish is medium-length, spice lingering.

I could've smelled this whiskey for hours. The nose is fabulous. The palate is a bit underdeveloped; This very liquid with more time in oak will likely be gorgeous. The brothers are doing good things, making thoughtful whiskey, and I am truly excited to taste what they release down the road.