Diageo first unveiled the Blade and Bow bourbon line back in 2015. At the time it was revealed, a 22 year old variant, drawn from older bourbon stocks located at the old Stitzel-Weller facility, was also made available. Said to be “limited edition” at the time, it seems since then to have become something of a yearly collectible offering, with bottlings being made available in 2017, 2018, 2019 and now 2020.

I recall being skeptical, when first viewing the style of the bottles, plus putting the Stitzel-Weller Distillery name on the label. I started off with the non-age statement basic offering for quite the reasonable price. I’ll admit it was delightful and ended up spending the extra buck on the 22 year version. I’m generally wary of bourbons over 20 years old, but the balance on this one was spot on. This was back in the earlier days of Blade and Bow as well, so I was intrigued as to what the 2020 offering had going on.

As for the name Blade and Bow, it is named after the two parts of a skeleton key and said to be “a tribute to the Five Keys of crafting bourbon made famous at Stitzel-Weller. Those keys included grains, yeast, fermentation, distillation and aging.” The keys also are represented on the whiskey’s geometric bottle with six sides, with one side bearing the Blade and Bow logo and product information, and “the other five representing each of the five keys to bourbon found throughout the Stitzel-Weller distillery.  Five different keys – some rarer than others – will adorn the bottles, with consumers being encouraged to collect all five.”

The new 2020 version of Blade and Bow 22 Year Old bourbon, according to those behind it, is being released partially in “celebration of the historic opening of the Stitzel-Weller Distillery 85 years ago.” It is said to be “the most recently aged and bottled bourbon at the Stitzel-Weller Distillery, which includes some of the last bourbon produced there before it closed in 1992, and inspired by the passion of its original creators.”

When it was released earlier this year, it was pricing around $450 per 750 ml bottle, which is quite a jump from the $150 price tag it first saw back in 2015. Prices seen at retail for the bottles available put it somewhat even higher. 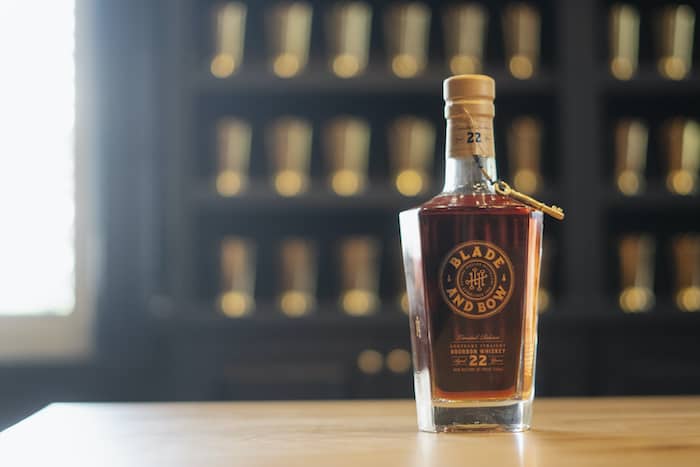 Appearance: The color certainly reflects the age. As a 22 year old whiskey, it’s a deep red, with a notion of cherry wood. In the glass, there were certainly a lot of legs going on.

Nose: My immediate response was simply rich with layers. Some classic and notable Bourbon notes of amarena cherry, leather, and brown sugar. Not a lot of heat, but with the addition of a few drops of water, picked up more of the sweeter elements.

Palate: On the palate, found a lot more fruit than was expected. Primarily cherry and oak were present in the forefront. A tad bit more on the medium bodied side with about the same amount of finish. This may come as a surprise, but at the end, I swear that there’s some red caramel apple, but it’s subtle.

This is quite the classy whiskey. Quite frankly, it's beautiful. If you're wondering about the price tag per bottle, probably not worth it. But who knows, we all have our romances with certain styles of whiskeys and the occasional brand.

I'll say that this is well worth splurging for at the bar for the experience. Smell, taste, savor, and repeat. It will still be beautiful, and even as one who doesn't like things to be over-oaked, the balance here is still solid.

As always, the tasting experience is always subjective, so please make the journey your own.