Editor’s Note: This whiskey was provided to us as a review sample by Heaven Hill. This in no way, per our editorial policies, influenced the final outcome of this review

Bernheim Original Kentucky Straight Wheat Whiskey is likely an already well known whiskey for those that love wheat style expressions. Said to be the first “truly new” variety of American straight whiskey introduced since Prohibition, it is produced at the Bernheim Distillery in Louisville, Kentucky, by Heaven Hill, a family run whiskey making company known for its bourbons and American whiskeys. While bourbon-makers have been using wheat in their mash bills for some time, Berhneim stands out as the for being one of the first to use winter wheat as the majority grain in the mash bill (other grains include corn and malted barley).

Bernheim, sporting a seven year age statement, is aged in Rickhouse Y at Heaven Hill’s Bardstown, Nelson County facilities. Given that it is a straight whiskey, it meets the same criteria as bourbon or rye for such a designation, including aged a minimum of two years in a new, charred oak barrel; distilled at less than 160 proof; and containing no no coloring, flavoring or blending agents. It is bottled at 90 proof.

Of interest to note with regards to this whiskey and a “small batch” designation given to it by Heaven Hill is the fact that, periodically, the master distiller “will select a limited number of barrels (typically no more than 100) from specific middle floor locations in the rickhouse that have matured to their high standards. These barrels will be mingled in limited quantities or ‘small batches.'”

How does Bernheim taste in the mix of wheat whiskeys out there? Let’s find out. 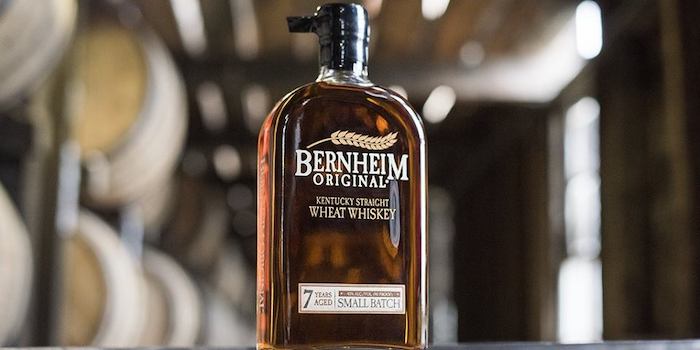 Appearance: Bright golden, blonde and amber hues, with slick legs and an oily texture. It’s thin and graceful, delicate but holds itself.

Nose: This expression is super mild on the nose, light notes of honeysuckle, grass, buttery toast, pancakes with syrup and vanilla whipped cream. Slight notes of oak and warm bread emerge as it opens up over time. It’s really straightforward, precise and airy. Bernheim is the exact opposite of a slap in the face – like a graceful waltz for the senses.

Palate: Like with other wheat whiskies, the mouthfeel is light and oily, but not sticky. The flavor is delicately sweet, with notes of sweet cinnamon roll and salted popcorn. Toffee, green grass and orange peel all melt together to form a complete picture. A few tannic notes on the finish, and lingers with notes of allspice, charred oak and sweet honey. The flavors are all subtle, it’s a nice change from in your face, bold and aged flavors. In a landscape where others are using extravagant and innovative techniques to stand out, Bernheim keeps it uncomplicated, standing out because of its simplicity.

Bernheim is a nice change from in-your-face bold expressions. I think a whiskey can still be delicate without being plain, but it just barely misses the mark. The light flavors were nice, but too simple and lacking nuance. I liked that it was easy to drink and I enjoyed it the most with some plain seltzer water and a twist of lemon.

3.5
User Rating 3.15 (20 votes)
Sending
54
Shares
13.8k
Views
Share on FacebookShare on TwitterGet Our Newsletter
Cheers to the Dads! Personalize a bottle of his favorite whiskey to create a modern gift for the modern man. Use code: FATHERSDAY20 for $20 off your next order of $100 or more at ReserveBar