Editor’s Note: This whiskey was provided to us as a review sample by Berkshire Mountain Distillers. This in no way, per our editorial policies, influenced the final outcome of this review. It should also be noted that by clicking the buy link towards the bottom of this review our site receives a small referral payment which helps to support, but not influence, our editorial and other costs.

Before I get going: If you think this review looks similar to the review of Samuel Adams Boston Lager American Whiskey that we ran recently, you are not losing your mind. These whiskies came as a set, but we needed to review each separately. There will be some overlap. Your mind is intact for another day.

In March, we reported about the Craft Brewers Whiskey Project, which has for the past five years brought together a select group of craft beer brewers across five states.

After five years of aging in oak barrels, Massachusetts-based Berkshire Mountain Distillers has released the first trio of whiskeys in partnership with three brewers in the Northeast: Samuel Adams, Jack’s Abby, and the aforementioned Berkshire.

Each of these whiskies is the product of a single-sourced craft brew distilled into a unique Berkshire Mountain Distillers whiskey, and each spend a month being sold only in Berkshire’s Massachusetts distillery before it gets distributed throughout the Northeast. Each is blended to 86 proof using Berkshire Mountain’s spring water and packaged in custom bottles with brewer-designed labels

Berkshire Shine Single Malt American Whiskey is the second in this trio. It’s made from Imperial Steel Rail Extra Dry Pale Ale from the Berkshire Brewing Company in South Deerfield, Massachusetts.. As reported by Cool Hunting, six of the distiller’s brewery collaborators are Massachusetts based. The others come from New England and New York. Bottle output for each iteration ranges from 300 to the low thousands. 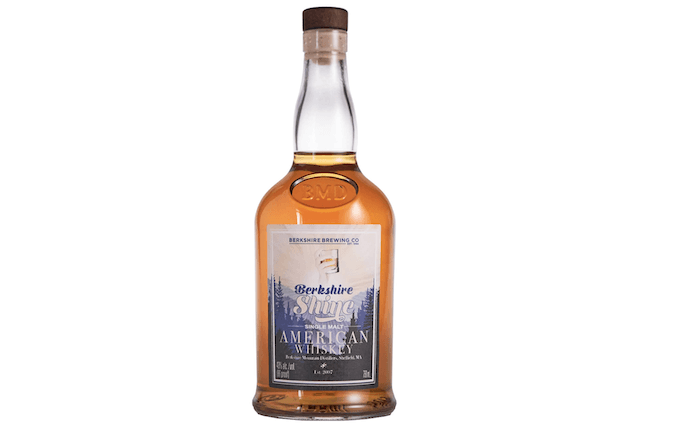 Appearance: Beige. Watered down honey with water: a honey syrup but without the glossiness. Sand on a moderately shady beach.

Nose: It differs from its Sam Adams brother in that it’s less beery, more fruit-forward. Still fruity like grape bubble gum, though. I also get cherries and peaches and Nilla wafers, all of which are nice things.

Palate: Oh. Yeah. So this is pretty beery, too. This tastes like the inside of your mouth after a shot and a beer and neither one of them living on the top shelf. Like you had a beer and just finished it and then someone poured you a shot in the same solo cup when there was still foam lining the sides. If you like beer, like really, really like beer, then this is the whiskey for you. No confirmation hearing necessary

I would give this 1.5 stars but the pleasant nose rounds this up to a 2.0.