Editor’s Note: This whiskey was provided to us as a review sample by Ben Milam Whiskey. This in no way, per our editorial policies, influenced the final outcome of this review.

Texas craft whiskey is having a moment.  The state now boasts its own Texas Whiskey Festival, which showcases a diverse range of styles from almost a dozen producers. In this relatively crowded field of craft whiskey standouts such as Garrison Brothers, Balcones and Yellow Rose, Ben Milam Whiskey is one of the newest and most-discussed. Today we’re focusing on their Single Barrel Straight Bourbon Whiskey, winner of a double gold medal in the 2018 San Francisco World Spirits Competition.

Ben Milam Whiskey is named for a military hero of the Texas Revolution and produced by Marsha Milam, Ben Milam’s first cousin six times removed. Silver script on the bottle’s label trumpets, “And those yet unborn shall honor Milam’s name,” dedicating the contents “to the Bold, the True, the Gallant,” underneath a silhouette of a man brandishing a rifle high in the air with a straight, strong arm.

Within a year of its release it had been declared by some as a collector’s item and heralded as “the world’s best bourbon,” both claims that are tough to make and back up in such a diverse whiskey industry. Marsha Milam, a veteran of Austin’s music and PR worlds, is a proud daughter of Texas, and her brand is bold, unabashed Texas pride, built solidly on local lore. But the Milam Distillery, founded 2017 in Blanco, fifty miles southwest of Austin, is one of the newest in Texas, and so in this review we will explore if the whiskey itself does or does not fully embody the storied richness of its historical namesake. 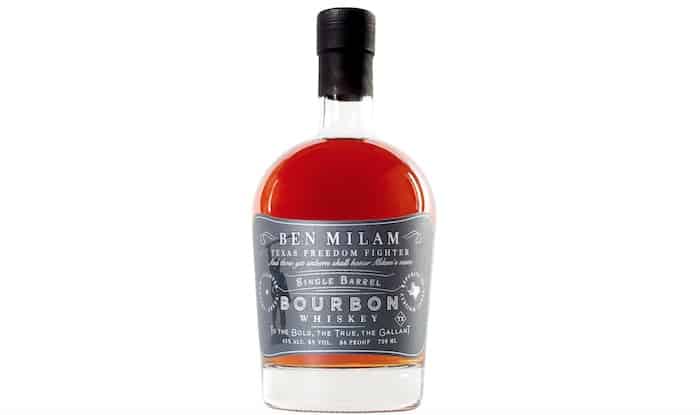 Some oddly herbaceous, almost Chartreuse-esque flavors emerged after about 30 minutes in the glass, though they were rather ethereal. Lightweight and low viscosity on the palate with a hint of rye-like spiciness. Clean and rapid finish without much tannic bitterness or drying.

It is tasty and approachable, albeit fairly straightforward and a bit one note. It would be interesting to try this next to a similarly priced Tennessee whiskey, such as Dickel Single Barrel. As one like-minded reviewer on YouTube put it, “Smells like a bourbon, drinks like a bourbon. Not a whole lot going on.”