Editor’s Note: This whiskey was provided to us as a review sample by Belfour Spirits. This in no way, per our editorial policies, influenced the final outcome of this review. It should also be noted that by clicking the buy link towards the bottom of this review our site receives a small referral payment which helps to support, but not influence, our editorial and other costs.

Last year, I talked with NHL Hall of Fame goalie Ed Belfour and reviewed the initial round of whiskies from his company, Belfour Spirits. It was a strong start in the whiskey business for a guy who likes to remind people he was a late bloomer on the ice.

Seventeen months later, I was happy to circle back and see how Belfour Spirits is faring. The distillery’s latest release, a limited-release Small Batch bourbon, is the first new whiskey since the brand’s 2019 launch – and, apparently, the first of what will be other one-off releases in future years.

Eventually, Belfour plans to open its own Kentucky distillery. In the meantime, this generation of Belfour Spirits is still being distilled at Southern Distilling in Statesville, N.C. So it’s sourced whiskey, but Ed and Dayn Belfour say they provided the mash bill and went to North Carolina for blending, barrel selection and proofing down.

Another thing that hasn’t changed since I last looked into Belfour is the brand’s decanter-style bottles, which really are a thing of beauty. They feature a 1920s art deco style that makes me think of luxury from a different era. In any case, they look good – and distinctive – sitting on the bar. 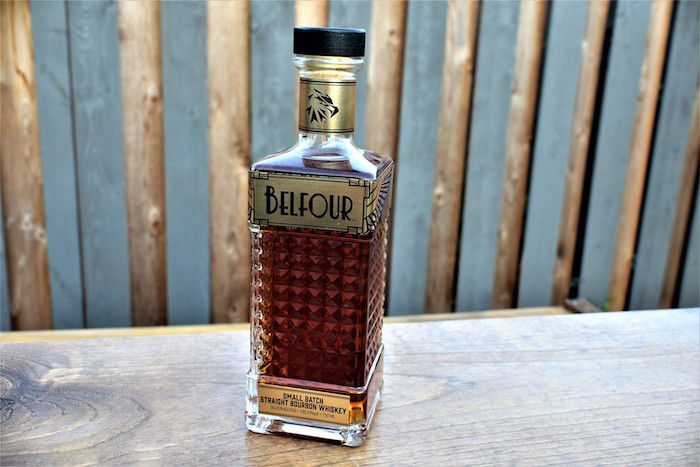 Nose: Cinnamon and cloves up front, spicier than I expected. The sweetness comes through in the form of caramel, honey, and chewy brown-sugar cookies.

Palate: For a young bourbon, this has a surprisingly lush mouthfeel. I taste walnuts, Ferrero Rocher hazelnut milk chocolates and spongy spearmint cake. The finish is moderate, with hints of vanilla and citrus.

Like the whiskies I tasted 17 months ago, the Small Batch is a quality pour. Clearly, Southern Distilling is doing a good job with the Belfour directives. I look forward to seeing where Belfour can take the brand when it’s bottling its own juice, but in the meantime we’re getting an indication that Ed and his family intend to make more than just a celebrity label.

The reservation I have is about price point. There are a lot of quality $99 bourbons, and I’d be hard-pressed to argue that Belfour’s is head and shoulders above many of the others.