The beautiful rainbow trout can be found in rivers across the globe, but these popular game fish are native to the western half of North America. Despite being a fairly common variety, they have a reputation for being a hard-to-catch game fish, which also makes them one of the most fun to catch.

Much like its namesake, Rainbow Whiskey is a hard whiskey to pin down. Named after the colorful rainbow trout that breed like crazy in the Pacific Northwest, Rainbow Whiskey is a truly Oregon-grown spirit. The spirit is produced and bottled in Monroe, Oregon, by Hard Times Distillers for Beaver Creek Distillery. The distillery uses clean spring water to make its spirits, and heavily hand-chars is Oregon White Oak barrels for a smokey sweet flavor. 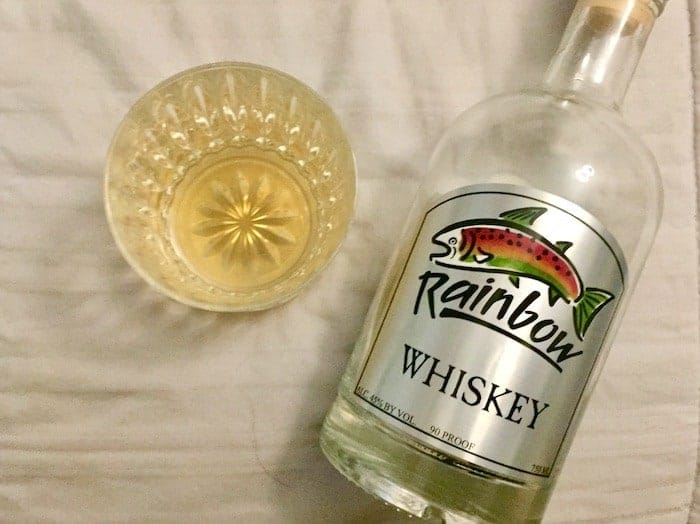 Vital Stats: Rainbow Whiskey is produced and bottled by Hard Times Distillery in Monroe, OR for Beaver Creek Distillers. The mash bill is 75% corn, 20% rye, and 5% barley, then aged in hand-charred Oregon white oak for at least four months. It’s 45% abv, and 90 proof.

Nose: Vanilla cake batter, complete with frosting. The smell is very sweet, but also boozey. Passionfruit and mango are also present in the nose.

Palate: It doesn’t taste as sweet as it smells. The spiciness of the rye hits first, followed by a heavy smokey flavor from the hand-charred white oak barrels. The heavy flavors are matched with angel food cake sweetness, cane sugar and toasted walnuts. I wouldn’t call it well-balanced, though. The heavy char flavor overstays its welcome on the finish, and the overwhelming sweetness on the end leaves my stomach in a weird knot. I like the rye spice, and there is a pleasant coppery note to the spirit as well.

After adding two ice cubes to my glass the sweetness dilutes and the spiciness subsides to reveal a very drinkable whiskey that goes down smooth and easy. I definitely agree with the distillery’s recommendation of serving three fingers of whiskey with two ice cubes.

I have pretty mixed feelings about this whiskey. I started sipping without adding any ice, and I think that's where my mistake was. Once I added ice, the too-spicy and too-sweet whiskey became suddenly a lot more palatable, and tasted more like rye bread. I think Rainbow Whiskey would make a really delicious Old Fashioned with some orange bitters.